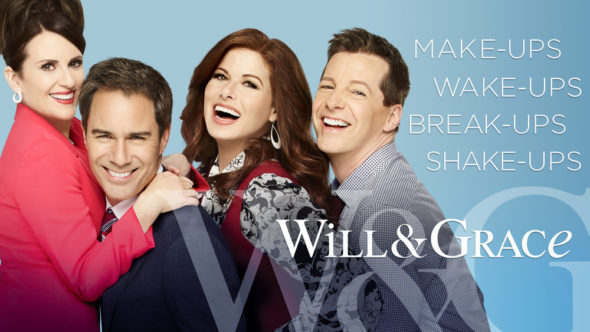 As the 10th season kicks off on NBC, fans don’t have to worry whether the Will & Grace TV show will be cancelled or renewed for season 11. The Peacock network already picked up the 11th installment back in March of 2018. It’s no surprise. Last year, the series revival was their second-highest rated scripted series in the demo, bested only by the Nielsen unicorn that is This Is Us. Can the fearsome foursome match or even beat the expectations they set in their first season back on the airwaves, or has the novelty worn off? Will Will & Grace be cancelled or renewed beyond season 11? Stay tuned.

4/5 update: You can see the latest night’s ratings in context.

For comparisons: The ninth season of Will & Grace on NBC average a 1.48 rating in the 18-49 year old demographic and 5.500 million viewers.

What do you think? Do you like the Will & Grace TV series? Are you glad that it’s been renewed for season 11 already? Do you think NBC could cancel it anyway if the ratings aren’t good enough?

I don’t want Will and Grace to end. This sucks!

I loved this show in it’s hayday. Now it’s far too political. Pushing liberal agendas, just like 95% of TV these days. Can’t we just put politics aside and entertain, the way it used to be? If I want to watch politics, I’ll just turn on fake news.

This once great show as been avg. this yr. Although funny at times, way too much gayness and not half gay and half straight as previous yrs.

I love this show, always have. Please keep em’ coming. All of them make the show what it is WONDERFUL!

I think this reboot is great and is so funny. I really hope it continues to get renewed. There aren’t many comedies that make me laugh hard and this one does.

person that loves her country
Reply to  Beth359

These people are trash, they want to hurt our great country. sick sick sick So happy they are canceled. The belong in a church and to pray to remove the devil from their sick bodies.