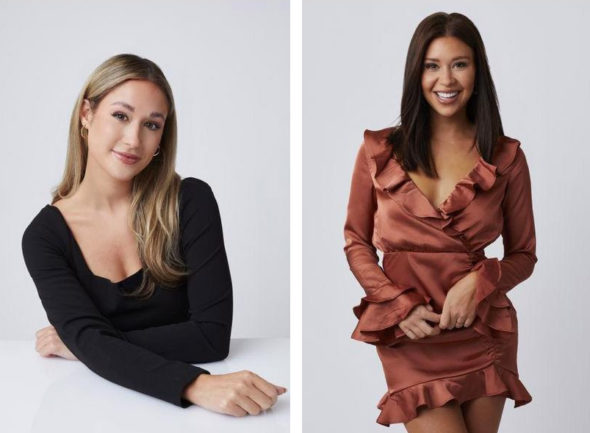 To no surprise, ABC is still in love with The Bachelorette. It was announced tonight that the alphabet network has renewed the show for a 19th season which will begin airing on July 11th.

This time around, the show will feature two ladies as they search for love — Gabby Windey and Rachel Recchia (seen above), the runners-up for the recently completed 26th season of The Bachelor. Jesse Palmer will return to host.

A dating reality show, The Bachelorette revolves around a single woman who sifts through a large group of eligible male contestants in the hopes of finding a romantic match and, possibly, a mate.

Here’s the renewal announcement from ABC:

After unwaveringly supporting each other through a devastating dual breakup in the season 26 finale of “The Bachelor,” fan favorites and fierce women Gabby Windey and Rachel Recchia will stand by each other’s side yet again as they set out on a journey to find love. The two will co-star on the upcoming season 19 of “The Bachelorette,” premiering MONDAY, JULY 11 (8:00-10:00 p.m. EDT), on ABC. Jesse Palmer will return as the host of the juggernaut franchise when it makes the move to its new summer slot.

“The Bachelor” ranks as the No. 1 entertainment series in its two-hour time slot this season among Adults 18-49. After 35 days of delayed viewing on linear and digital platforms, “The Bachelor” averages 6.9 million Total Viewers and delivers a 2.56 rating with Adults 18-49 this season.

Gabby Windey
Gabby Windey is much more than meets the eye. Not only is she beautiful, but she also has a lot of substance, emotional depth and a wealth of lived experiences. Windey is looking for a man with quiet confidence. She doesn’t have a physical type but says that if he doesn’t have a personality, then it’s a hard pass. Her ideal man will challenge her, communicate his feelings and work hard to equally carry the weight of the relationship. Her one nonnegotiable? Whatever man captures Windey’s heart must also have room in their life for her four-legged friend because she and her goldendoodle, Leonardo, are a package deal. While Windey would love to find a man, she isn’t the type to lose herself in a relationship. She’s hoping to find a man who will love her for the independent woman she is.

Rachel Recchia
Rachel Recchia is a fearless frequent flyer looking for a man who will travel the world with her. After recently earning her private pilot license, the future is nothing but sunny skies ahead for Recchia and now she is hoping to find a co-pilot that matches her sense of adventure. As a hopeless romantic, she is looking for someone who is as playful, passionate and spontaneous as she is. He should be nurturing, empathetic and MUST be respectful in all facets of life – to her, to family and especially to waiters. In the end, Recchia wants to find crazy, insane love that makes sense to no one else but her and her soul mate.

About Warner Bros. Unscripted Television
Warner Bros. Unscripted Television is the leading unscripted studio in America, currently producing over 60 series and documentaries, totaling around 2,000 hours of programming annually across over 30 platforms in broadcast, cable, streaming, digital, first-run syndication and podcasts. Led by studio president Mike Darnell, the division is comprised of Warner Horizon, Shed Media and Telepictures and produces leading and award-winning series and franchises such as “The Bachelor,” “The Bachelorette,” “The Voice,” “Friends: The Reunion,” “Harry Potter 20th Anniversary: Return to Hogwarts,” “911 Crisis Center,” “The Ellen DeGeneres Show,” “Extra” and “The Real,” as well as “Paris in Love,” “True Story with Ed and Randall,” “Finding Magic Mike,” “The Real Housewives of New York City” and “The Bradshaw Bunch,” among others. Upcoming projects include “The Wheel,” “101 Places to Party Before You Die,” “One Perfect Shot” and “The Jennifer Hudson Show.”

What do you think? Do you watch The Bachelorette TV series on ABC? Are you glad to hear that it’s been renewed for season 19?

I do watch, even though I don’t really care for high school games. It’s difficult to take the show seriously, ever ! It’s entertainment.

Forgot to comment on Jesse Palmer returning as host. He was so, so good. As good as Chris Harrison was. And easy on the eyes. I am familiar with him from his hosting duties on all the Food Networks baking championship shows. So I knew he would be a great host for The Bachelor. Hope he’s a permanent keeper.

I’m excited to see these 2 girls go head to head with the men. Curious how it will work. I did enjoy Clayton’s season of the Bachelor. Yes, he was a dofuss, and he didnt handle things well, but it made for good tv. So we will see how Gabby and Rachel handle falling in love. Maybe they will understand Clayton a little better.