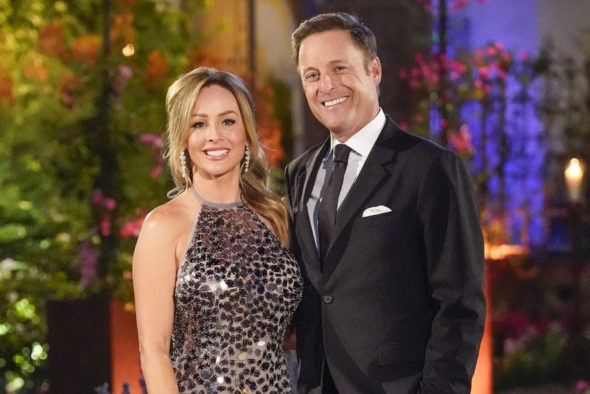 Another lady will have a chance to find true love on the 17th season of The Bachelorette but Chris Harrison (above, right) won’t be hosting. ABC has renewed the long-running series but has announced that Harrison won’t be back, at least for the 2021 season.

A “reality” dating competition, season 16 of The Bachelorette initially followed 39-year-old hair-stylist Clare Crawley (above, left), the runner-up of the 18th season of The Bachelor. She fell in love with former football wide receiver Dale Moss, became engaged, and departed the competition in week four (they have since broken up). Crawley was replaced by Tayshia Adams, a 29-year-old phlebotomist, who found love with Zac Clark, an addiction specialist.

The 16th season averaged a 1.31 rating in the 18-49 demographic and 4.73 million viewers. Compared to season 15, that’s down by 15% in the demo and down by 18% in viewership. The series remains one of ABC’s most-watched unscripted series of the current 2020-21 season. Due to production delays stemming from the ongoing pandemic, season 16 aired in the fall instead of the summer of 2020 as originally planned.

A premiere date for season 17 hasn’t been announced yet but production is slated to begin at the end of this month. The cast and crew are currently quarantining at a resort near Albuquerque, New Mexico but Harrison isn’t among them.

Last month, Harrison stepped down from hosting the upcoming  After the Rose special for the current season of The Bachelor. He did so following comments he made in an interview with contestant Rachel Lindsay on Extra. Harrison came under fire after defending Bachelor contestant Rachael Kirkconnell after photos of her attending a 2018 antebellum plantation-themed fraternity party resurfaced.

He later apologized for the statements. “The historic season of The Bachelor should not be marred or overshadowed by my mistakes or diminished by my actions. To that end, I have consulted with Warner Bros. and ABC and will be stepping aside for a period of time and will not join for the After the Final Rose special,” Harrison wrote. “I am dedicated to getting educated on a more profound and productive level than ever before.”

ABC and franchise producer Warner Horizon Unscripted Television have released a statement regarding his immediate future with the franchise. “Chris Harrison will not be hosting the next season of The Bachelorette,” the companies said. “We support Chris in the work that he is committed to doing. In his absence, former Bachelorettes Tayshia Adams and Kaitlyn Bristowe will support the new Bachelorette through next season. As we continue the dialogue around achieving greater equity and inclusion within The Bachelor franchise, we are dedicated to improving the BIPOC [Black, Indigenous and People Of Color] representation of our crew, including among the executive producer ranks. These are important steps in effecting fundamental change so that our franchise is a celebration of love that is reflective of our world.”

What do you think? Are you a fan of The Bachelorette TV series? Are you glad that this show has been renewed for a 17th season on ABC? Will you miss Harrison? Should he return in the future?

I will not watch the bachelor unless Chris Harrison comes back

I don’t think I will watch without Chris on it . And what the hell, Matt knows how the show goes…see these people aren’t screened very well. Plus you turned that second last episode all about race…? That was wrong. I don’t believe there are any people who haven’t seen this show, it’s the same thing whether it’s # 1, 5 , 10 … they all throw the “love” word around like it’s nothing , and all the crying….omg crazy !!! I think I am done !

Will not be watching without Chris Harrison

Chris Harrison the person, and even the name Chris Harrison, are synonymous with the Bachelor/Bachelorette brand. Removing him from the show does not demonstrate integrity, it merely continues the current trend of falling in line to conform to current peer pressure tactics, which are most likely empty and only put forth in hopes of keeping or growing some business model. No one of us is without flaw or need to grow in our humanity. Problems are corrected and solved best by sincere effort from within, not by corporate’s fake claims to care, or bashing and exiling anyone deemed usable to… Read more »

Can someone explain to me why these shows are entertaining to you? Am I wrong that only a handful have stayed together? Supposedly the whole purpose of the show!
Why do women take this so seriously when it is no different than Rock of Love, Flavor of Love, or I Love New York on VH1.
Are these shows the new romance novels that have the muscly guys on the cover?

Actually their have been quite a few successful relationships and marriages out of this franchise. More from The Bachelorette, then The Bachelor and Bachelor in Paradise. Why, I dont know. Maybe ask Chris Harrison?

Chris Harrison apologized & vowed to educate himself. Everyone deserves a second chance. If he is not given the opportunity to come back as host, I will not watch the Bachelor moving forward.

Christ Harrison needs to continue to be the host. It must be hard to support and respond in a rightful way when put on the spot. Hopefully after a break an some reflection about everything that has gone down, he will be able to return and hold his head up high.

I love the bachelor/bachelorette franchise and I feel that Chris Harrison apologized and is seeking guidance to understand how his dialogue has upset the black community. I would like to see him back as the host as he has been there all these years. The show is a success and some credit should go to Chris Harrison.

I’m extremely upset with the way Chris Harrison is being treated. He said NOTHING wrong. It’s really ashamed that someone in the entertainment industry can speak in defense of a friend and have such backlash for it. Sharon Osbourne just recently had a similar experience. Speaking in defense of her friend Piers Morgan. I am not happy that Chris Harrison will not be hosting The Bachelorette. I do like Tayashia. And Kaitlyn very much. At least they are part of the Bachelor franchise. But I would prefer to see Chris Harrison as host. Shame on the big wings ar ABC… Read more »

I 100% agree. Will not be watching anymore

I totally agree with you, I will not be watching it anymore.

I have been faithful through all your seasons; even sat through Juan Pablo. And I believe we, as a people and a nation, could do better as people in regards to fair and equal treatment for others. However, when you can’t accept an apology from Chris Harrison AND promote the “past” actions and dialogue AND try to erase our history (however shameful), then I can no longer follow your show. And your replacement hostesses are tokens in my book and do not have the skills required for hosting.

The past is the past every one makes mistakes in life. Learn from them and move on