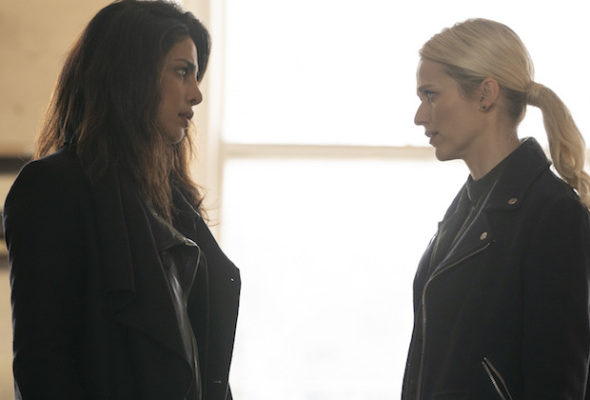 After three seasons and 57 episodes, the adventures of Alex Parrish have come to a close. ABC cancelled their Quantico TV show earlier this year so the show has ended. Were the ratings that bad? Should Quantico have been renewed for a fourth season?

An ABC drama, season three of Quantico stars Priyanka Chopra, Jake McLaughlin, Johanna Braddy, Russell Tovey, Alan Powell, Marlee Matlin, and Blair Underwood. Alex Parrish (Chopra) left the CIA behind for three years of peaceful anonymity in Italy. Now, though, Ryan (McLaughlin) convinces her to help save Shelby (Braddy) from a notorious international arms dealer known only as The Widow. They draft Harry (Tovey) and Owen (Underwood) to their cause. Owen tags in Jocelyn Turner (Matlin), who has a history with The Widow. Together, they form a whole, new black-ops force.

The series debuted in September 2015 to some very good ratings. It looked like ABC might have a new hit series but the ratings quickly fell and the first season averaged a 1.24 rating in the 18-49 demographic with 4.34 million viewers. The network renewed the series for a second season in March 2016, when only half of the season had aired.

Producers made some changes to the series, likely hoping that the numbers for season two would be better. That didn’t happen. Season two ended up averaging a 0.67 demo rating with 2.79 million viewers. That was a huge season-to-season decline. Still, Quantico landed a third season renewal, possibly due to lucrative streaming and international deals.

This time around, ABC held Quantico until much later in the season. Network execs seemed resigned to the idea that Quantico wasn’t going to draw very good ratings. After three weeks of Thursday night airings, the series was moved to Friday nights. The ratings were terrible, even for a Friday night show. It’s been averaging a 0.43 demo rating with 2.57 million viewers. With numbers like these, it was no surprise that ABC decided to call it quits and cancelled Quantico. Of course, that doesn’t mean that loyal viewers are ready for the show to end.

I loved the show but the Ryan-Shelby storyline kind of pissed me off. I also think Nimah Raina and Caleb and even the other members of the CIA missing from the show didn’t sit well. There’s so much more they could’ve done with the show to keep it going and get ratings back up. The writers and producers just didn’t know how

Please make more episodes of quantico. I love it so much .

I loved the series!!! it was a bad called to cancel it. Also I would of loved if Alex an Ryan ended up together not with Shelby. I’m writer and Alex should of ended with Ryan. They always loved each other very much. I didn’t like the twist of writers of them not ending up together. Love is one of the biggest force in universe and it doesn’t matter how long or how far you are away from that person love always always wins. Please bring it back for a fourth season.

Same. I was actually upset at Ryan for marrying Shelby! Out of all the women in the world, Shelby? If it had’ve been someone else an innocent woman who knew nothing of his past career, that would’ve made sense. But I hate that Ryan and Shelby never felt guilty about getting together and actually made Alex have to have an apologetic attitude about Ryan trying to kiss her. Major girl code violation!

Please return Quantico. Maybe a spin off, but same cast. Have Netflix pick it up. Try Tuesday or Thursday nights if abc keeps it.

I would most definitely have watched a 4th season. Very good show. They always seem to cancel good shows and keep the stupid ones.

I most definitely would have watched season 4 of Quantico I loved the show and I need to see Alex raise Isabella .

I would have so watched season four. The show was good and keep you on your toes. They need to bring it back.

YES, I would watch season 4! This show was well written and well acted, turns and twists… The timeline moving back and forth was brilliant in season one, it showed how they applied what they learned and it did some great mind benders, loved it. The end was a downer, the stories need to continue!

I would have also watched a 4th season! I was disappointed when season 3 ended abruptly. Anyway not sure that our options matter? But I would have loved to watch! Many stories ended unfinished? Like everyone expected Alex & Ryan to eventually get together? Etc…