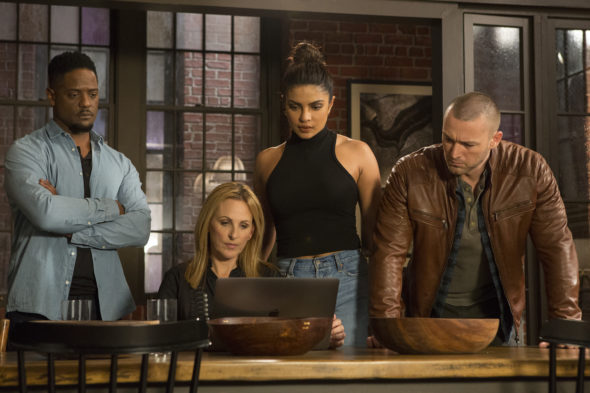 How goes Alex Parrish’s mission during the third season of the Quantico TV show on ABC? As we all know, the Nielsen ratings typically play a big role in determining whether a TV show like Quantico is cancelled or renewed for season four. Unfortunately, most of us do not live in Nielsen households. Because many viewers feel frustration when their viewing habits and opinions aren’t considered, we’d like to offer you the chance to rate all of the Quantico season three episodes, below.

An ABC terrorism drama, season three of Quantico stars Priyanka Chopra as Alex Parrish. The cast also includes Jake McLaughlin, Johanna Braddy, Russell Tovey, Alan Powell, Marlee Matlin, and Blair Underwood. Alex left the CIA behind for three years of peaceful anonymity in Italy. Now, though, Ryan (McLaughlin) convinces her to help save Shelby (Braddy) from a notorious international arms dealer known only as The Widow. They draft Harry (Tovey) and Owen (Underwood) to their cause. Owen tags in Jocelyn Turner (Matlin), who has history with The Widow. Together, they form a whole, new black-ops force.

What do you think? Which season three episodes of the Quantico TV series do you rate as wonderful, terrible, or somewhere between? Should ABC cancel or renew Quantico for a fourth season? Don’t forget to vote, and share your thoughts, below.

5/11/18 update: ABC has cancelled the Quantico TV show so there won’t be a fourth season. Details here.

please continue with quantum season 4. is a beautiful series, it can not end like this!
Thank you

I think tht Quantico has been a wonderful t.v. show that I have watched so far. I think there should be a season four to this show it’s very interesting and it keeps you in suspense.

I love Quantico. Please dont cancel it. This show is amazing.

Everytime they have a decent show on for adults they cancel it. That is so stupid

The rating system is antiquated and needs to be redeveloped. Lumping 18-49 in one category is ridiculous…we normally do not have the same taste in TV shows. I can’t stand the silly music competition shows, single dating (marriage) shows, and most sitcoms. I like good drama TV w/ actors that fit together like a glove, and story lines that keep me interested. The drama shows seem to be the ones getting cancelled by the handful. It’s extremely frustrating to become interested in a show and lose it.

Would really LOVE it if Quantico would be considered for renewal! The season finale is keeping me on the edge, can’t wait to see what happens next with every show. The suspense is killing me. Please consider renewing.

By the way the rating change because after season one they keep switching days and hours, very stupid move by the network.

I have enjoy QUANTICO this Season….to me looks very odd that ABC is cancelling the show. They are going to loose so much viewers that is ridiculous. Give Quantico another chance, I love the cast and the plots are getting better every week. We want to see Alex Parrish to be happy with Ryan.

Booth and Alex had their time, he should stay w/ Shelby…she should be w/ McQuig and raise Bella.

Really liked Quantico. Very interesting plots in each episode. Kept my interest each week seeing it. Like others have mentioned it seems like really good shows get canned while other stupid shows remain on! Please DO NOT CANCEL QUANTICO!!

Please renew quantico I love this show… You need to keep it going…. All the good shows get cancelled…. I think it gets better and better Every week

It’s cancelled. I liked it.

Have watched through all its iterations and have enjoyed each one. I hope it will stay on.

season 4 needs to be picked up by a different network

I myself watched the first episode this season so excited it was back and then turned it off. The marriage was ridiculous of Ryan and Shelby. it disgusted me so much I stopped watching. I don’t watch any idiotic reality shows etc by the way and I considered this one of my favorite shows but that was stupid

I’ve loved the show from the first episode, and watched every one. However, I know a few people that stopped watching it because the flash backs from the present to when they were in Quantico confused a lot of people. They couldn’t follow it. Others stopped watching cause they moved it around too much. I think they were trying to find a good time slot, but they would put it against long standing shows and wonder why people weren’t watching. I can’t even count the number of days/time slots the show had. It’s as though ABC wanted it to fail… Read more »