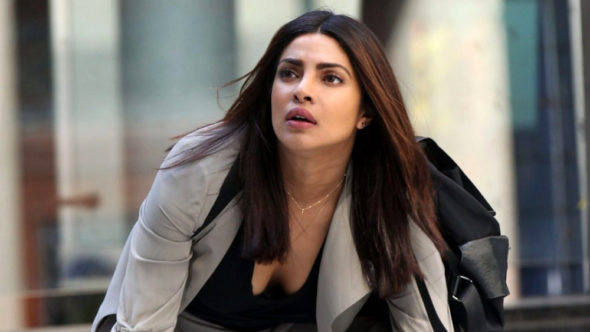 It looks like Alex Parrish’s fight is finally over. ABC has decided to cancel their low-rated Quantico TV show so there won’t be a fourth season.

An ABC terrorism drama, season three of Quantico stars Priyanka Chopra as Alex Parrish. The cast also includes Jake McLaughlin, Johanna Braddy, Russell Tovey, Alan Powell, Marlee Matlin, and Blair Underwood. Alex left the CIA behind for three years of peaceful anonymity in Italy. Now, though, Ryan (McLaughlin) convinces her to help save Shelby (Braddy) from a notorious international arms dealer known only as The Widow. They draft Harry (Tovey) and Owen (Underwood) to their cause. Owen tags in Jocelyn Turner (Matlin), who has a history with The Widow. Together, they form a whole, new black-ops force.

Quantico: A Look at the Ratings

The third season of Quantico on ABC is averaging a meager 0.50 rating in the 18-49 demographic and 2.29 million viewers. Compared to season two, that’s down by 26% and 18%, respectively.

The series has done well in international sales but apparently, coupled with these very weak ratings, that revenue wasn’t enough to get Quantico a fourth season renewal on ABC.

It’s unclear exactly when the defacto series finale will air since only three installments of season three have run thus far.

What do you think? Did you like the Quantico TV show? Would you have watched a fourth season on ABC?

Here it is July 2021 and this is my “go to” binge watch series. Would love if Netflix could add a new season to the series . I am disappointed that it got cancelled after three seasons. Wanted to see Alex and Owen’s trust and friendship develope. They worked well together as agent and handler.

Yes I am so disappointed. I didn’t realize season 3 only had 13 episodes. I want season 4. Ugh.

I loved the third season, i need a fourth! It can’t end like this!! Best show ever tbh.

I’m so sad it’s over and ending season 3 has so many loose ends. It definitely needs a fourth season to complete the story. Please…… !!!!!!!

Yes I love quantico tv show and I would love for it to be a forth season !!!

This was the show that got me hooked! Thrilling and clever!! Amazing stories and plots! Refreshing! I would watch 10 seasons! I work, I direct a dance group, I tend to my family but I can still watch a show like Quantico at the end of the night. Season 4!! Please wrap it up! Such talent!! Thanks

I love this show with all of my heart. Stopped watching a while ago because I’ve been busy with school work, but I need to see a fourth season! Please bring it back!

I got hooked on after watching 4 episodes. Don’t leave us hanging. Me personally would love to see Alex and Ryan get back together. If you saw the last few minutes. I think Shelby was going to leave Ryan ??