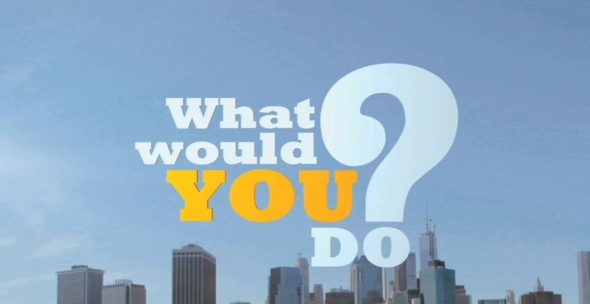 What Would You Do? will be back this spring. ABC just announced the TV show will return for its 15th season in May.

Hosted by John Quiñones, the hidden camera series seeks to discover how and when people feel they must intervene and when and why they choose to mind their own business.

WHAT WOULD YOU DO? (season premiere)

“What Would You Do?” with anchor John Quiñones reveals how people behave when they think no one is watching by using hidden cameras to record people’s real reactions to thought-provoking, actor-driven scenarios, inspired by some of the biggest stories making national headlines. Ethan Nelson is the executive producer of “What Would You Do?” for Lincoln Square Productions.”

What do you think? Have you seen What Would You Do? Will you check out the new season?

I’m very confused about the WWYD renewal. I’ve read it was renewed and was supposed to air in May but it most definitely did not air and I can find no upcoming episodes of it.

Never heard of this show