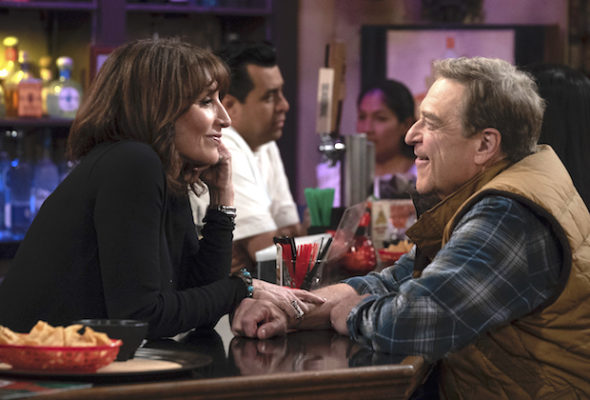 What can fans expect from the new season of The Conners? ABC just revealed the guest stars for the TV show’s second season.

Season two of The Conners will see the return of Katey Sagal as Dan’s old friend, Louise. Additionally, Estelle Parsons James Pickens Jr., and Jay R. Ferguson will return to guest star on the ABC series.

Although, not everyone will be returning. According to TVLine, Maya Lynne Robinson will not appear in season two of The Conners. The actress has booked a series regular role on CBS” new series, The Unicorn.

The new season of The Conners debuts on ABC on September 24th at 8 p.m. ET/PT.

Golden Globe(R) Award-winning actress Katey Sagal is returning to ABC’s hit comedy series “The Conners” for a 10-episode arc in which she will star as Louise, an ex-rock drummer who now manages Casita Bonita. Louise went to high school with Dan Conner (John Goodman) and is catching up on lost time with him while in Lanford, Illinois. She will first appear in episode 203.

Returning with Sagal are fan-favorite guest stars including Estelle Parsons as Beverly Harris, James Pickens Jr. as Chuck Mitchell and Jay R. Ferguson as Ben. “The Conners” returns for its second season on TUESDAY, SEPT. 24 (8:00-8:30 p.m. EDT), on ABC.

What do you think? Do you watch The Conners? Will you watch the new season?

I guess that they are excited by the returning guest stars, like Estelle Parsons. They included it in 2 paragraphs. I may watch when Estelle appears. She’s one of my all time favorite character actresses, and I liked what they did with her on “Roseanne” by making her closer to Nana Mary (the late Shelley Winters) than the whiny middle aged lady that Beverly sometimes was. Even then, she was a lot of fun, especially when she helped the girls decorate her mother like a Christmas tree.

I would not ever watch that horrible show. Sara Gilbert ruined the show. Roseanne and John Goodman made the show. Nothing could make me watch anything Gilbert is in. Hope she sleeps well at night.

I will watch again only because I love John Goodman, and think lecy Goranson is hysterical and her as a mom will be great, and Saras TV son mark is great, will watch pretending Sara Gilbert is not there, and now as one of the producers she will make alot of discisions, will never forgive what she did to Roseanne, that lady made you baby girl, she was your TV mom, and your ego far out weighs your talent, you put to shame your real life sister Melissa Gilbert, 10 years on Little house, never a bad word for her… Read more »

Roseanne is responsible for her own actions and got what she deserved. It is not Sara Gilbert’s fault that Roseanne could not keep her big mouth shut and her racist ignorant views to herself. That’s on Roseanne. She was liberal in the old show and apparently age has made her a big old lunatic

This show is just a shell of itself. Without Roseanne it’s not funny nor entertaining. Like everything else tv sitcoms like this are politicized to form a Liberal opinion therefore eliminating viewer ship from people who have other views. Shameful and sad that this is where we are.

I will not watch this show ABC was my favorite network
Until the cancellation of the kids are alright! Don’t watch anymore
And won’t they don’t know family tv

We will watch it. They have taken away so many comedies, that we watch the ones they have.

Actually i thought dj’s wife was all wrong for him, and it showed when they acted together. they didn’t seem to be on the same page at all. But we will watch this show this year.

No thank you. Too mixed up…you have too much diversity. You did Roseanne wrong and it was horrible how you killed her off! Just not that funny now.

I loved Roseanne and it’s just not the same without her and her Laugh.

Disappointed to know that Maya Lynne Robinson won’t be present on the second season of “The Conners”, just for the fact that she added a few laughs to the show– but, it’s just as well, in regards to her character’s interaction with her husband on the show, D.J. Conner, and his interaction with her– sure didn’t seem like a married –with a child–couple !

No I guess they all look so different and I just don’t think it’s entertaining. But good luck to them.Why they brought that show back and not “Thee Kids Are Alright” is a real head scratcher. That was so funny even my husband liked it and he hates most sitcoms everyone loved it. So strange not to bring it back.

It’s really not a head-scratcher. The Conners overall rating was 1.56; The Kids Are Alright was .87. Renewals and cancellations are based on ratings. The Conners’ ratings were almost double TKAA. Pretty straightforward decision.