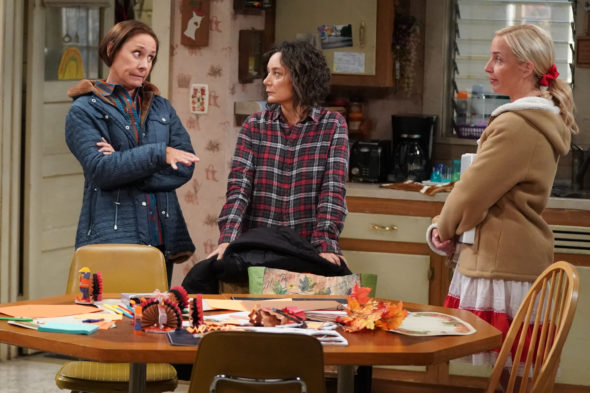 The Conners is headed to a renewal for season three. The four main stars of the series, Sara Gilbert, John Goodman, Laurie Metcalf and Lecy Goranson have all signed deals for a third season, which will consist of 19 episodes. ABC still needs to pick up the series though. Those talks are now on-going, per Deadline.

Tom Werner said the following about The Conners:

“We are very pleased with how the show is doing, and my hope is that — I’m confident that the network will pick up the show for another year, hopeful anyway. My sense is that there is a lot of enthusiasm about what we are doing.”

Karey Burke, ABC Entertainment President, also spoke about the future of the series:

“They are just in a groove. When I took this job, I was told, ‘Well, you probably have one season with The Conners.‘ I think because they have fun and the show does so well, they keep wanting to do more. We will do The Conners as long as they do more episodes.”

What do you think? Do you want another season of The Conners?

I enjoy the show and how things have moved forward. Anyone who doesn’t watch, and who is/was a long time fan, you are missing out. The story and characters have a lot of meaning.

Bring back Roseanne. She is funny. I take all the reruns and watch a marathon of the original Roseanne. She was the comic genius of the show. The new Connors are not funny at all.

The Conners have proven that a great show can be made without Roseanne!

Don’t like the laughter-it sounds like canned laughter NOT real audience laughter. So I have quit watching it now.

it is a live audience. lol

Nobody needs you to watch it anyway

I LOVE THE CONNERS. KEEP THE SHOW GOING.

So sad. Without Roseanne there was no reason to continue this drivel

Yes, more Conners, I love it!

Yes. I love the show and can’t wait to see what relationships develop. It is my favorite sitcom. Hope it’s on for many years.

I never watched much of “Roseanne” during its first run but it was apparent the show was a success because of Roseanne Barr. Regardless of what Barr did, it is like a stab in the back to see the supporting cast continue to ride on her coattails. They should have refused to continue the show to despite the financial gains for them.