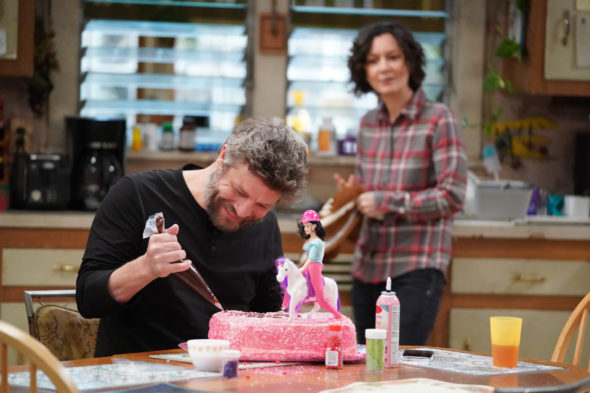 The Conners is bringing a big name to its cast for a special appearance. Candice Bergen, from Murphy Brown, is set to appear on the mid-season premiere. She will play the mother of Ben, played by Jay R. Ferguson (pictured above, left). John Goodman, Laurie Metcalf, Sara Gilbert, Lecy Goranson, Michael Fishman, Emma Kenney, Ames McNamara, and Jayden Rey also star in the sitcom which follows the lives of Dan Conner and his children.

Deadline revealed more about Bergen’s appearance on the ABC series:

“Bergen will play Ben’s (Jay R. Ferguson) mother, Barb. Their relationship can best be described as cool. Despite being from Lanford, Barb has a superior air and a sharp tongue, but she’s much more agreeable when she’s had a few drinks. She’s judgmental about Ben’s relationship with Darlene (Sara Gilbert), and describes the Conner house as, ‘Like one of those places they break into on that program Cops.’”

A preview of Bergen’s appearance on The Conners has also been released by the network. Check it out below.

What do you think? Are you excited to meet Ben’s mom on The Conners?

Never saw “The Connors” – I am watching old reruns of “Roseanne” and the original ones were great! She connected with “any family USA” – but then she got “too big for her britches” – make up, hair, Tom, – her whole attitude changed and it was all about her. Just not funny anymore-that said I can’t imagine a show about the Connors without her.

Jay Ferguson is hilarious as Ben. Unfortunately the show is slipping. I’m sure Jay will be lead in a future show somewhere.

I’ll watch but this show, for me, is on a fast down-slide. Looks like Mr Warewolf has trimmed his beard… yeah. I was beginning to think we’d see something crawl out! Or worse, he looks like the uni-bomber. Hopefully he was cast in another role and that beard was for that role. Tone down crazy mouth Jackie, please, as her comments on Beverly have evolved to being too much and over-the-top! Bev was never as bad on any of the shows as she makes her out to be. I miss seeing Beverly… and nitpickingly, I wish people would quit whining… Read more »

In my opinion nothing can help The Connors.

I’ll still watch the Connors. Candice Bergen would be great in that role.

Yes I think Candice Bergen will be great for the show. However the best thing that could
happen would be to bring Roseann back. She made the show and has been punished enough. A lot of my friends including myself have lost interest without Roseann.