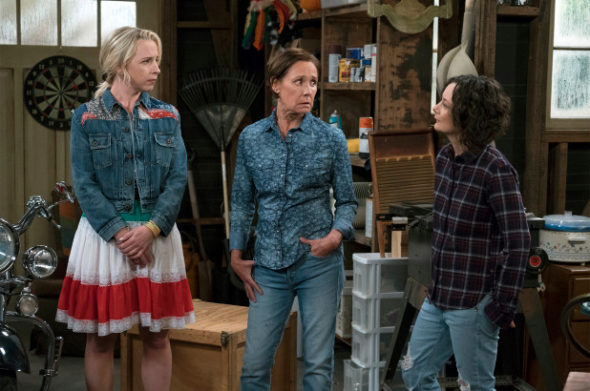 Are you a fan of The Conners? Recently, star Laurie Metcalf spoke with Entertainment Tonight about the future of the ABC TV show.

In the interview, Metcalf seemed confident that there will be a second season of The Conners:

I believe it’s going to happen. I think we’ll do between 10 and 13 [episodes], something like that.”

And what’s in store for the ABC sitcom? Metcalf says:

I think the tone will be the same, but I love not knowing what’s coming up at all. I don’t get the scripts until the Friday after we do a taping, and then I get to read what we’ll be doing starting next Monday.”

What do you think? Do you watch The Conners? Do you want a second season?

Please do not cancel The Connors!! There are many talented actors on The Connors…Sara Gilbert is a great replacement & plays well off the other characters. Roseanne’s absence is NOT missed & her demise does not diminish The Connors success as a great comedic show!

I love the show. Please renew it

I was a little skeptical at first because of Roseanne leaving but I love the Conners, it has the same flair and story lines I love. I wad a fan and am still a fan! Please do another 10 seasons!

The Roseanne reboot was unexpectedly very good. I find the Connors also very good – the other characters are no longer there just to set up Roseanne’s punchlines. I’m enjoying seeing them fleshed out and I look forward to more of Jackie the life coach – loved the episode where she actually gave Becky some great advice. I hope the show continues.

Cancel the show. It sucks now.

Cancel the show. I will never watch any of those traitors again. They Threw Rosie under the bus. Shame on all of them.
Shame on ABC.

I wish Roseanne was still on the series, but i still like the show.

Of course she would say that. I would to if I needed a job. DON’T RENEW IT.

The show doesn’t seem to have the same soul as before, it’s like it has no direction not even for a sitcom, it’s all over the map….hate to say it but I don’t think it should be renewed

The show has lived it’s life. Time to move on. It’s like a severance package for the cast and crew giving them the 1 season for short notice cancelation. They probably had their schedules rearranged for Season 2 of the Rosanne revival. ABC had obligations to meet it was hit or miss and it missed.

I have twice attempted to leave my lengthy remarks, and was dumped off. I will continue to watch The Connors, because of its value in the drama of my own life.

Yes, I want it to continue. As much as I liked Rosanne, the rest of the cast has always been great!!!!

I thought the series fell flat without Roseanne. We will not continue watching.

Agreed. I never felt the punishment fit the crime and the cast should have stood behind Roseanne.