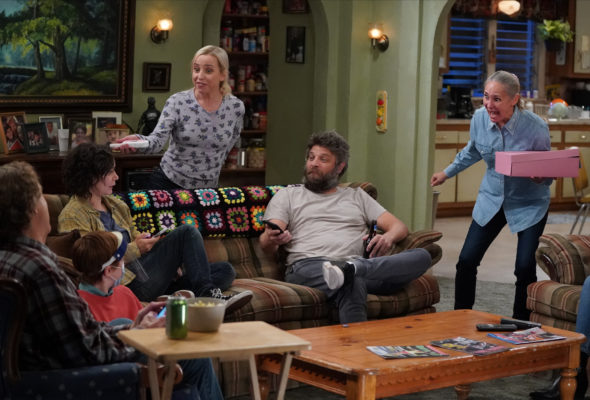 How many Conners can fit under one roof? Has The Conners TV show been cancelled or renewed for a fourth season on ABC? The television vulture is watching all the latest cancellation and renewal news, so this page is the place to track the status of The Conners, season four. Bookmark it, or subscribe for the latest updates. Remember, the television vulture is watching your shows. Are you?

The third season of The Conners averaged a 0.62 rating in the 18-49 demographic and 3.66 million viewers. Compared to season two, that’s down by 42% in the demo and down by 37% in viewership. Find out how The Conners stacks up against other ABC TV shows.

Will ABC cancel or renew The Conners for season four? The series has been ABC’s highest-rated comedy series so, I have no doubt that it will be renewed. I’ll update this page with breaking developments. Subscribe for free alerts on The Conners cancellation or renewal news.

5/14/21 update: The Conners has been renewed for a fourth season on ABC.

What do you think? Are you glad that The Conners TV show has been renewed for a fourth season? How would you feel if ABC had cancelled this TV series, instead?

I cannot understand viewers who still refuse to watch this show just because Roseanne was fired. I would rather Roseanne was still in it – but she isn’t. Although very important/prominent – she wasn’t the only reason why I have watched this show (Roseanne & the Conners) from the very first episode. It is doing the other actors a great disservice by refusing to watch because of a poorly judged rant by Roseanne several years ago. I love watching all the characters in this show and to be honest I think it is virtually the same – even without Roseanne… Read more »

Rosanne was created based on rosannes own life, killing her off yet continuing it as a spin off never sat well with many

Because this day and age people are so dang sensitive and just look for a reason to ruin others..
sad but true.

I enjoy watching the show. It’s a simple easy watch. Jackie cracks me up!

I love the Conners please don’t cancel them.

The Connors is a good show, however, changing it to a Wednesday night line-up, big mistake. It’s up against Chicago Fire and that’s why I have to watch The Connors on demand.

I love the Connors please don’t cancel this tv show, please renew it for season 4 the only successful reboot ever! And it’s a great show!

I love the Conners . The characters are well known and true friends who you can understand what they are going through

The Conner Show should not be renewed, I watched it once & didn’t find it funny!

I watched it and found it funny – please renew.

“The third season of The Conners averages a 0.72 rating in the 18-49 demographic and 4.05 million viewers. Compared to season two, that’s down by 33% in the demo and down by 30% in viewership.” A 0.8 rating in the 18-49 demographic puts a show on the bubble, and this isn’t even achieving that! Advertisers are how shows make money, and the fewer people that watch, the less advertisers pay. Unless ABC can get the cast to take a paycut, it’s unlikely this is going to achieve enough ratings to continue.

So by your reasoning, ABC will certainly be canceling The Goldbergs, Big Sky, The Good Doctor, American Housewife, A Million Little Things, Black-ish, For Life, and all but 2 of their non-scripted shows. Not likely.

Bring back Roseanne and I guarantee the ratings will go up. Kick her off of a show for a misunderstood, political tweet, not meant to be racist. Bring her back, work her into the storyline. Maybe it was a dream, maybe it’s all been in Darlene writing just as Roseanne was a writer in the last part of the original Roseanne show. Have Roseanne exist again!

Or give her, her own show! After the way they treated her, I wouldn’t want to work with them again.. let them fail, she doesn’t need to save them! So agree with you Matthew on the political tweet and look how many have said/posted worse but yet they’re still working! Roseanne made that show, she gets removed and look where the “Goners” are now!

Yes, PLEASE bring back “The Connors” for another season & even more to come. I love this show! I look forward to seeing it every week! If they brought back Rosanne Barr to the show I think that would make it even better!

Never watch it… Not the least bit interesting. Don’t watch the Goldbergs, either!

Why would anyone bother to comment on a show they have no interest in?