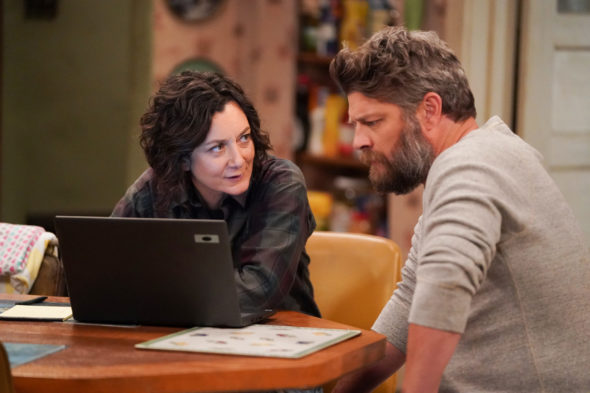 The Conners has decided to make a change in the household for its new season. Jay R. Ferguson, who plays Darlene’s boyfriend Ben, has been made a series regular for season three of the sitcom. At the end of season two, Darlene and Ben had decided to live together in the Conner house to help keep it afloat financially.

TV Line revealed more about Jay’s elevation in status on the series. They shared comments made by Bruce Helford earlier this year when asked about the possibility of Ben having a bigger role in the comedy. He said the following:

“It hasn’t really come up come up yet. Jay and Sara [Gilbert] have a long history. They were buddies since they were teenagers. And their chemistry is so freakin’ good. We didn’t know [the Darlene/Ben romance] was going to be long-term. We actually had plans at one point for her to be thinking about somebody else and kind of blowing this relationship up. But as we watched them we [realized] you can’t get much better than the way they act with each other because they’re two alphas going at it. And there’s a genuine affection between them in real-life.”

As for another recurring member of the cast, it is likely that fans will see less of Katey Sagal. The actress has just signed on to Rebel, which is coming to ABC. She has appeared as the girlfriend of patriarch Dan Conner (John Goodman) on the series.

The Conners returns to ABC with its third season on October 21st.

What do you think? Are you excited to see more of Ferguson? Are you ready for the return of The Conners to ABC?

I’m glad Ben is going to continue to be on as now I have a reason to continue watching The Connors. The baby episode with him made me laugh so hard! He is so funny and handsome!

I do like the Connors, but totally miss Roseanne… after all the things that Trump says & does, she shouldn’t have got in so much trouble that they took her show away from her. I MISS HER & DAN & HER & Jackie.. best episode ever was the bathroom scene LMAO just don’t get those laughs on The Connors.. long story short, glad they are still returning for another season 🙂 but, wish they could have another dream scene where she actually returns … just like Dan did 🙂

I don’t watch this show…. ever!

I can’t wait to see where their relationship goes. I feel like Darlene has finally met her match.

I am glad that they are bringing Connors back for a third season but not very happy about Ferguson. I don’t think he fits in and I wish that they would put Johnny galecki back in as David and make him a regular again.

Yes I love Ben and Sara together. I like seeing him as full time on show and yes I am excited for something normal again. I love The Conners.

I am glad that Jay R. Fergusson finally becomes a regular on The Conners.

I am thrilled the Connors are coming back and Ben is part of the cast. Will we ever learn his last name?