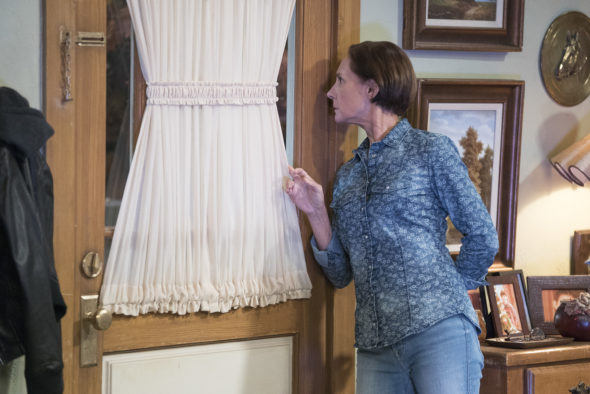 How long can Dan Conner and family carry on without Roseanne? Has The Conners TV show been cancelled or renewed for a second season on ABC? The television vulture is watching all the latest cancellation and renewal news, so this page is the place to track the status of The Conners, season two. Bookmark it, or subscribe for the latest updates. Remember, the television vulture is watching your shows. Are you?

The first season of The Conners averaged a 1.56 rating in the 18-49 demographic and 7.46 million viewers. Find out how The Conners stacks up against other ABC TV shows.

Will ABC cancel or renew The Conners for season two? While I don’t think The Conners will end up being a big hit, I suspect the ratings will be strong enough to land the series a second season renewal. I’ll update this page with breaking developments. Subscribe for free alerts on The Conners cancellation or renewal news.

What do you think? Are you glad that The Conners TV show has been renewed for a second season? How would you feel if ABC had cancelled this TV series, instead?

Worst decision ever. Terrible show without the mother.

Please renew them for a second and third season. I do not know what happened to the conners youngest son, Jerry, or Jackie’s son, Andy. But I am looking forward to seeing this without Roseanne

Cancel “Splitting up together.” Ive heard the preteens & 14-17 yrs saying it’s ok to sleep w/anyone when they get married. The time slot 4 the show is wrong….kids r still up watching TV & the show portrays a scense of morally. I know it was a runoff from a Danish Show. The Europeon views r far more open & sexual. I have school age kid, their not allowed to watch this show.
Showing kids they can sleep w/ anyone when they are married is wrong.
.