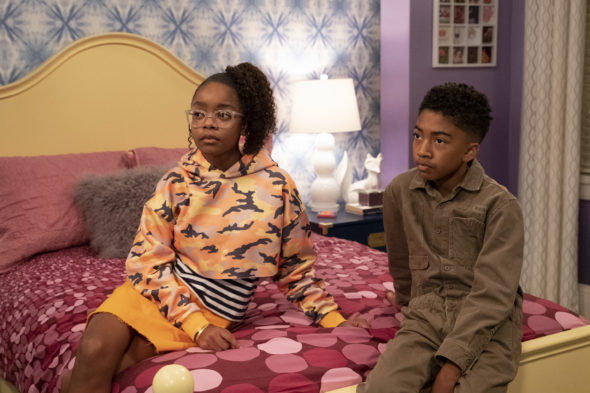 Is Dre Johnson still keeping his family’s feet on the ground? Has the Black-ish TV show been cancelled or renewed for a sixth season on ABC? The television vulture is watching all the latest cancellation and renewal news, so this page is the place to track the status of Black-ish season six. Bookmark it, or subscribe for the latest updates. Remember, the television vulture is watching your shows. Are you?

A family comedy airing on the ABC television network, Black-ish stars Anthony Anderson, Tracee Ellis Ross, Yara Shahidi, Marcus Scribner, Miles Brown, Marsai Martin, Peter Mackenzie, Jenifer Lewis, Deon Cole, and Laurence Fishburne. Dre (Anderson) and Rainbow (Ross) Johnson want to give their children the best, and they’re determined that best will include a strong sense of cultural identity and respect for the past, as their foundation for a bright future. Season five kicks off with the Johnsons dropping Junior (Scribner) off at college, but they soon learn he has other ideas.

The fifth season of Black-ish averaged a 0.78 rating in the 18-49 demographic and 3.29 million viewers. Compared to season four, that’s down by 34% and 23%, respectively. Find out how Black-ish stacks up against other ABC TV shows.

Will ABC cancel or renew Black-ish for season six? I think it will be renewed for a sixth season. Fans still love the series, and ABC’s programming slate has bigger problems. Still, I’ll keep an eye on the Nielsens and update this page as needed. Subscribe for free updates on any Black-ish cancellation or renewal news.

5/2/19 update: ABC has renewed the Black-ish TV show for a sixth season.

What do you think? Are you glad that the Black-ish TV series has been renewed for a sixth season? How would you feel if ABC had cancelled this TV series, instead?

I’m glad it’s coming back because it’s not many Black or Brown positive family shows on TV. They always try to show us in a negative way which is not always the truth about our community!! Thanks for bringing the positive influence back!! I love this show and the people on it!!

I am so glad that this show is being renewed. I love watching their relationship together as a family. I too have been with my husband 19 going on 20 years. So their ups and downs are relatable. I just started watching the show recently due to not knowing of it. It’s a great show. I hope more people find it. I recommend it to all ages. Love the show, watched all 5 season within a month. ( I usually don’t watch TV shows. We go to movies or watch movies from Netflix acct.)

right the show is soooooo amazing!!