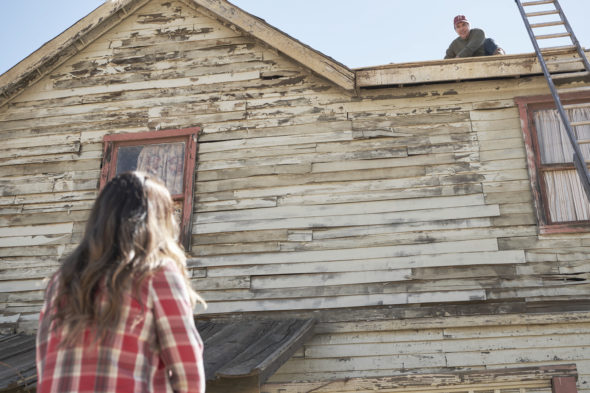 Should Mike and Rio go back where they came from? Has the Bless This Mess TV show been cancelled or renewed for a second season on ABC? The television vulture is watching all the latest cancellation and renewal news, so this page is the place to track the status of Bless This Mess, season two. Bookmark it, or subscribe for the latest updates. Remember, the television vulture is watching your shows. Are you?

An ABC fish-out-of-water sitcom, Bless This Mess stars Lake Bell, Dax Shepard, Ed Begley Jr., Pam Grier, David Koechner, JT Neal, and Madison Curry. The single-camera comedy centers on newlyweds Mike and Rio (Shepard and Bell), after they decide to forsake the hustle and bustle of New York City for a more pastoral life in Nebraska. Once the couple arrives in cornhusker country, it doesn’t take them too long to figure out that living a simple life requires a lot of hard work. Bell co-created the series with Elizabeth Meriwether.

The first season of Bless This Mess averaged a 0.66 rating in the 18-49 demographic and 3.35 million viewers. Find out how Bless This Mess stacks up against other ABC TV shows.

Will ABC cancel or renew Bless This Mess for season two? The series got off to a mediocre start and the ratings saw a big hit in week two. There are only six episodes in the season so there’s little time to recover. I think it will likely be cancelled but I’ll keep an eye on the numbers and update this page with breaking developments. Subscribe for free alerts on Bless This Mess cancellation or renewal news.

5/10/19 update: ABC has renewed Bless This Mess for a second season.

What do you think? Are you glad that the Bless This Mess TV show has been renewed for a second season? How would you feel if ABC had cancelled this TV series, instead?

I love this show! It feels true to upper plains small town, good, bad, or otherwise. It’s a warm and funny show. Love the quirky characters.

Very glad it got renewed! First sitcom that has made me laugh out loud since Friends and Seinfeld! Great cast too! I need a little silly at the end of the day!

I really enjoyed this comedy. Please keep it!

I really enjoyed this show. Please bring it back!

My family and I like this show. Of course it’s over the top and outrageous. That’s what makes it funny. Comedy is not to be taken seriously or personal. It’s meant to be funny. Do you remember Green acres? It was out rages and over the top, and it was enjoyed by viewers for many seasons.

I really wanted to like this show as I like a number of the actors. However, it is so outrageously over the top that it seems to be stupid & an insult to all our intelligence. I’m really surprised it got renewed. I won’t be tuning in for this continuation.

We love the show it is funny and the characters all work very well together .

It is cute and funny so far , very new , but if it continues this way , it will be good and should continue .

I would say renewal it it hilarious. It may be one of those show that take a hit after season 2 fanale so season 3 may be lower. But if the writing dependent is good it can save it pass that . So I see no reason why it should get an season 2.

Why do you have posts the next day after a program airs asking if it is canceled or renewed. This cannot be accurately answer with just one airing.

Many shows have been cancelled after one episode. If a show’s premiere ratings are terrible, it’s rare for them to improve enough for the series to survive. With so many options, many people make a decision about whether or not they’ll watch a show again. Hope that helps!