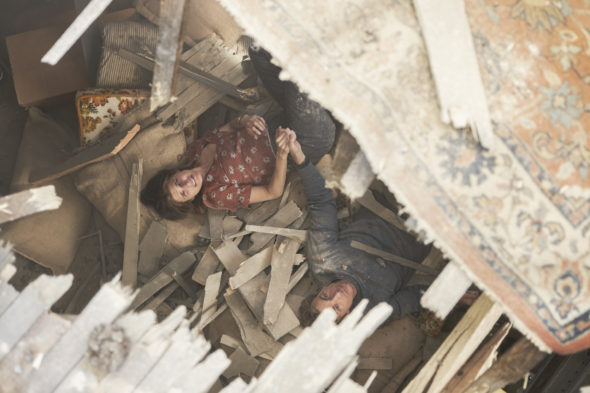 TV show description:
From co-creators Lake Bell and Elizabeth Meriwether, the Bless This Mess TV show is a single-camera comedy. The sitcom — which relies heavily on the “situation” part of the formula — centers on newlyweds Mike and Rio (Shepard and Bell), after they decide to forsake the hustle and bustle of New York City for a more pastoral life in Nebraska.

The Green Acres meets The Money Pit adventure begins when Mike inherits a farmhouse from his great-aunt. Although a picture may be worth a thousand words, old pictures tell less than the total tale. While the house looks quaint and homey in photos, it is currently in major disrepair and should probably be condemned.

Rio and Mike don’t know that when they leave their jobs, friends, and family behind, in order to start over as fledgling farmers in the only triply landlocked state in the country. Once the couple arrives in cornhusker country, it doesn’t take them too long to figure out that living a simple life requires a lot of hard work.

Among their new neighbors is the quirky Rudy (Begley), who claims he has permission to live in their barn. There’s also Constance (Grier), who is not only the sheriff, but also owns the local emporium, which serves as the general store, feed store, and lumber yard.

Jacob (Neal) is one new neighbor who is legitimately excited to have Mike and Rio in town. Meanwhile, there is a little bit of tension between his parents, Kay and Beau Bowman (Parham and Koechner), and the new arrivals.

Despite Rio’s fear of cows and control freak tendencies and Mike’s relentless (and sometimes unrealistic) optimism, the duo is here to stay. Now they just have to learn how to weather the storm (not to mention mend their roof before it rolls in) and rise to the challenge of country living.

Series Finale:
Episode #26 — Tornado Season: Part Two
When a tornado touches down in Bucksnort, everyone’s concerns about their current situations are heightened. Mike and Beau are still at odds about their egg businesses and who will earn Dolores’ restaurant contract; and a mix-up with pregnancy tests leads Rio, Kay and Jacob’s girlfriend, Janine, to each think they might be pregnant.
First aired: May 5, 2020.

What do you think? Do you like the Bless This Mess TV series? Should this ABC TV show have been cancelled or renewed for a third season?

Bring back Bless this mess! Please, please ,please.
The characters are so quirky and relatable. We want more of these wonderful characters.❤️

Try getting it on TNT like CougerTown did or the CW

I can believe they cancelled this show, its one of the best I have seen in a while. It actually makes my wife and I laugh out loud. It was a great night time show, no stress, no angst, just simple fun.

I think they made a mistake on this one.

I totally agree. Fun to watch & provides lots of laughs!!

Super bummed Bless This Mess is canceled, I got so many people hooked on it and now ABC does this!!!
Please reconsider??

Love this show just read it has been cancelled. This was the funniest show yet and can’t understand why it was cancelled pleas bring it back for season 3

I love this show. Can’t wait until Season 3!

I LOVE THIS SHOW!!! I gave up on sitcoms until this show. Hilarious. Characters hilarious. Please don’t cancel

Just found this show and LOVE IT. I’m laughing out loud every episode.

This show should be cancelled. Being from Nebraska, I can tell you this is not at all what it is like to live in Nebraska.

Come on! Really? Just sit back and laugh about the personas not the geography.

The cast is great! Keep up the good work!!

Please keep this show. It is full of laughs and lovable.

Definitely hoping it continues to air!

My husband and I love this series. It is refreshing and unlike any other show. Keep it coming! All the actors are very good, and the characters are quirky, and fun.