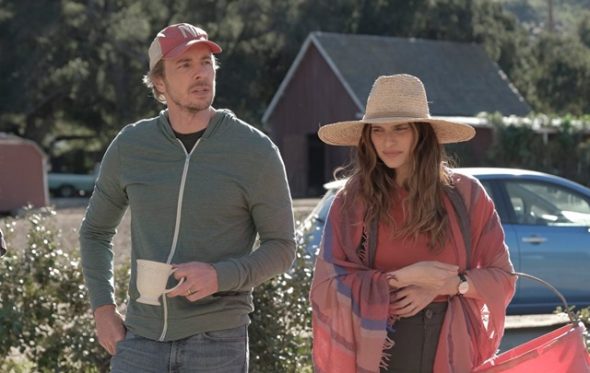 Are you feeling at home with the second season of the Bless This Mess TV show on ABC? As we all know, the Nielsen ratings typically play a big role in determining whether a TV show like Bless This Mess is cancelled or renewed for season three. Unfortunately, most of us do not live in Nielsen households. Because many viewers feel frustration when their viewing habits and opinions aren’t considered, we’d like to offer you the chance to rate all of the Bless This Mess season two episodes here. *Status update below.

An ABC comedy series, Bless This Mess stars Lake Bell, Dax Shepard, Ed Begley Jr., Pam Grier, JT Neal, David Koechner, and Madison Curry. In the series, young newlyweds Mike and Rio Levine-Young (Shepard and Bell) give up their lives in New York City to run a farm in Nebraska that Mike’s great-aunt left to him. Once in cornhusker country, it doesn’t take them too long to figure out that living a simple life requires a lot of hard work.

What do you think? Which season two episodes of the Bless This Mess TV series do you rate as wonderful, terrible, or somewhere between? Should ABC cancel or renew Bless This Mess for a third season? Don’t forget to vote, and share your thoughts, below.

*5/21/20 update: Bless This Mess has been cancelled by ABC so there won’t be a third season.

Bless this mess is the first TV series I’ve seen in a long time that I actually enjoy watching and with everything going on right now I really need a laugh and I don’t know why it’s being canceled! All the actors are great in it and it’s a really fun storyline! Please bring it back! This world needs some light-hearted comedy in a little laughs.

Bless This Mess is a great tv show. I loved the silly comedy in it and wish there was going to be a third season. I sure hope abc changes it’s mind or someone else picks it up!

Not enough good family shows on wish it would continue

We absolutely love “Bless this Mess” the only comedy I look forward to watching. So very funny. Enjoyable to watch!!