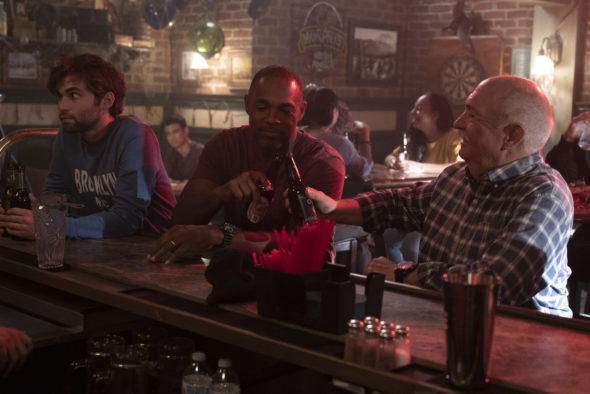 Will this family of firefighters take the heat in the third season of the Station 19 TV show on ABC? As we all know, the Nielsen ratings typically play a big role in determining whether a TV show like Station 19 is cancelled or renewed for season four. Unfortunately, most of us do not live in Nielsen households. Because many viewers feel frustration when their viewing habits and opinions aren’t considered, we invite you to rate all of the third season episodes of Station 19 here. *Status update below.

An ABC action-drama series, Station 19 stars Jaina Lee Ortiz, Jason George, Boris Kodjoe, Grey Damon, Barrett Doss, Jay Hayden, Okieriete Onaodowan, Danielle Savre, and Miguel Sandoval. The story centers on the heroic firefighters at Seattle Fire Station 19. From the captain to the newest recruit, they risk their lives and hearts, both in the line of duty and off the clock. The brave men and women are like family and together, they put their own lives in jeopardy as first responders to save the lives of others.

What do you think? Which season three episodes of the Station 19 TV series do you rate as wonderful, terrible, or somewhere between? Do you think that Station 19 should be cancelled or renewed for a fourth season on ABC? Don’t forget to vote, and share your thoughts, below.

Love Engine 19 please keep it around. Love it when they have a Grey’s crossover too.

Hope this show stays around for a long time. I also hope G A hangs in longer than just one more season.
Both favorites of mine.

Station 19 is a good show with different informative messages in their plots. The writers are phenomenal and I look forward to Season 4 .
Thanks in Advance

Keep going! Enjoy this show. Sad Ryan is gone but excited for what’s to come.

I’m a long term Greys Anatomy fan. I liked Station 19 but have really enjoyed the integration of the two. It works as a natural given the separate but relatable truths of the two distinct operations. The character development has been interesting, as it’s crossed the standard lines. The ongoing relationships created/and altered have proven for my taste to generate ongoing interest. The momentum has continued I find Station 19 compelling, since I had only a surface appreciation of firefighters and their reality prior to watching the show. Predictability is a death blow for me. Thankfully, these two rarely disappoint.… Read more »

Grey’s anatomy needs to go back and try to get as many original actor/ actresses as possible. I watch the show because I’m addicted to it after watching it so long. However I miss the passion that it started out with. The cast members need stronger friendships/ relationships inside and outside of the hospital. When it first started out everybody was close and had each other’s backs through thick and thin. Now all the old cast members do is fight against each other. Their friendships need mending . They all should be at the same hospital, loving each other as… Read more »

I like the show , I also liked the crossover. I will continue watching as log as it is on .