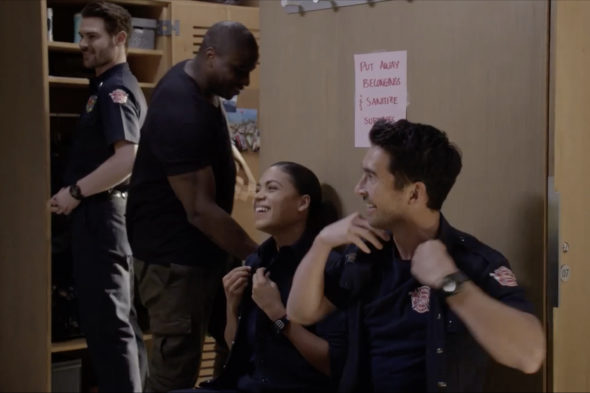 Are these firefighters prepared for what’s to come in the fourth season of the Station 19 TV show on ABC? As we all know, the Nielsen ratings typically play a big role in determining whether a TV show like Station 19 is cancelled or renewed for season five. Unfortunately, most of us do not live in Nielsen households. Because many viewers feel frustration when their viewing habits and opinions aren’t considered, we invite you to rate all of the fourth season episodes of Station 19 here. *Status Update Below.

An ABC firefighter drama, Station 19 stars Jaina Lee Ortiz, Jason George, Boris Kodjoe, Grey Damon, Barrett Doss, Jay Hayden, Okieriete Onaodowan, Danielle Savre, and Stefania Spampinato. The TV series centers on the heroic firefighters at Seattle Fire Station 19. From the captain to the newest recruit, they risk their lives and hearts both in the line of duty and off the clock. The brave men and women are like family and together, they put their own lives in jeopardy as first responders to save the lives of others.

What do you think? Which season four episodes of the Station 19 TV series do you rate as wonderful, terrible, or somewhere between? Do you think that Station 19 should be cancelled or renewed for a fifth season on ABC? Don’t forget to vote, and share your thoughts, below.

I used to like Station 19, until it became political. I have deleted the show from my watching list today. No more preaching please!

I would love see to station 19 renew 5season !! My big fan

Love the show, and renew for the fifth season

Love this show all amazing shows

Oh my goodness! I am so happy I started to watch Station 19. I binge watched the first 2 seasons with my family and we couldn’t get enough. This show really caught me by surprise. RENEW IT!!!!!!

I like the show, no opinion on best or worst ones, sometimes when it gets a little like a “soap” I don’t really care to watch as much. Like it otherwise !

I love the first episode last night. It is an eye-opener. I can’t wait to see how the writer will develop an individual episode.