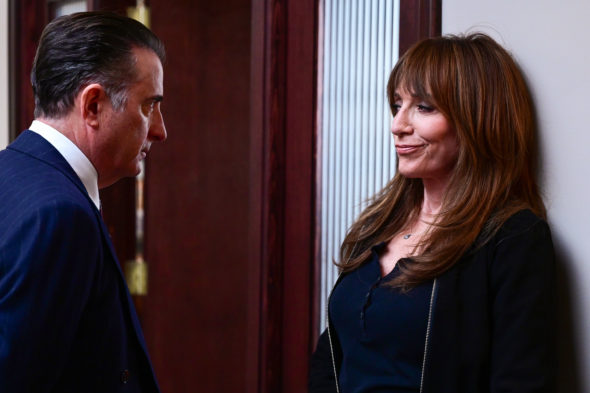 How far will Rebel go in the first season of the Rebel TV show on ABC? As we all know, the Nielsen ratings typically play a big role in determining whether a TV show like Rebel is cancelled or renewed for season two. Unfortunately, most of us do not live in Nielsen households. Because many viewers feel frustrated when their viewing habits and opinions aren’t considered, we invite you to rate all of the first season episodes of Rebel here.  *Status Update Below.

An ABC drama series, the Rebel TV show is inspired by the life of activist Erin Brockovich today and stars Katey Sagal, John Corbett, James Lesure, Lex Scott Davis, Tamala Jones, Ariela Barer, Kevin Zegers, Sam Palladio, and Andy Garcia. Annie “Rebel” Bello (Sagal) is a blue-collar legal advocate without a law degree. She’s a funny, messy, brilliant and fearless woman who cares desperately about the causes she fights for and the people she loves. When Rebel applies herself to a fight she believes in, she will win at almost any cost.

What do you think? Which season one episodes of the Rebel TV series do you rate as wonderful, terrible, or somewhere between? Do you think that Rebel should be cancelled or renewed for a second season on ABC? Don’t forget to vote, and share your thoughts, below.

Best new show on TV in the last 20 years

I’m really upset that “Rebel” is cancelled! The last few episodes were awesome! Would have loved to continue watching!

This was a great show bring it back it was so relevant it made sense I love it quit taking good shows of and keeping the crummy shows.