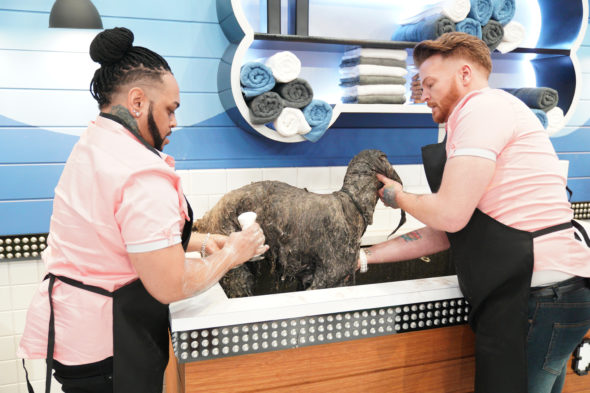 Who will be “Best in Show” in the first season of Pooch Perfect on ABC? As we all know, the Nielsen ratings typically play a big role in determining whether a TV show like Pooch Perfect is cancelled or renewed for season two. Unfortunately, most of us do not live in Nielsen households. Because many viewers feel frustrated when their viewing habits and opinions aren’t considered, we invite you to rate all of the first season episodes of Pooch Perfect here.

An ABC competition, Pooch Perfect is hosted by Rebel Wilson and judged by Lisa Vanderpump, Jorge Bendersky and Dr. Callie Harris. This dog grooming competition series features some of the best dog groomers in the country (along with their assistants) competing in a series of themed challenges. In each episode, teams compete and try to earn immunity from elimination. Then, the teams face off with a grooming transformation. The judges are tasked with voting on the incredible creations, naming one team Best in Show, and ultimately forcing another team to go home to the doghouse. Episodes lead up to the season finale where the top three teams compete for a giant cash prize and the coveted “Pooch Perfect” first place trophy.

What do you think? Which season one episodes of the Pooch Perfect TV series do you rate as wonderful, terrible, or somewhere between? Do you think that Pooch Perfect should be cancelled or renewed for a second season on ABC? Don’t forget to vote, and share your thoughts, below.

I most certainly won’t watch this show , no interest.

Very concerned about the coloring used on the dogs. Thought this show was appalling. Dogs are not toys to be treated in such a ridiculous manner in the name of entertainment. Cancel this!

Barbara. They use a safe dye designed for animals. It does not harm them. These dogs are getting attention and that’s all they care about. It does not hurt them. And keep in mind, one of the judges is a veternarian. They dont know what is going on. But if you dont like, dont watch it.

I can’t wait until they cancel this show

This show is so much fun to watch!

It was very corny/silly. I’ve seen dog grooming shows before and they were much more professional, but I love dogs and will continue to watch this show.