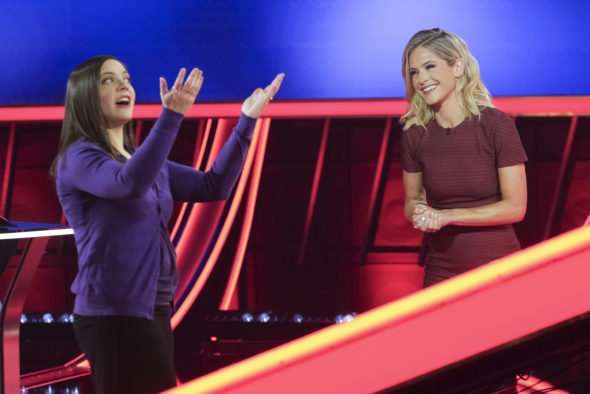 Who can answer the most questions in the first season of The Chase TV show on ABC? As we all know, the Nielsen ratings typically play a big role in determining whether a TV show like The Chase is cancelled or renewed for season two. Unfortunately, most of us do not live in Nielsen households. Because many viewers feel frustrated when their viewing habits and opinions aren’t considered, we invite you to rate all of the first season episodes of The Chase here.  *Status Update Below.

An ABC quiz show, The Chase TV series is hosted by Sara Haines. The show is a fast-paced competition where three competitors must pit their wits and face off against the Chaser, a ruthless quiz genius who is determined to stop them from winning cash prizes. Each episode, contestants are challenged to think faster than they ever thought possible, to answer up to 166 questions across all topics. Trivia masters James Holzhauer, Ken Jennings, and Brad Rutter take turns serving as the Chaser.

What do you think? Which season one episodes of The Chase TV series do you rate as wonderful, terrible, or somewhere between? Do you think that The Chase should be cancelled or renewed for a second season on ABC? Don’t forget to vote, and share your thoughts, below.

Keep The Chase. Most interesting and knowledgeable trivia show. The Beast is the Best.

please dont cancel.
but please stop the theatrics. don’t need loud dramatic music.
could do show in a half hour,too
use all three experts in same show. the two sitting upstairs is nonsense

Agree with please don’t cancel!!!
But
LOVE, Love, Love the hour long show!
And I like the experts up top
🙂