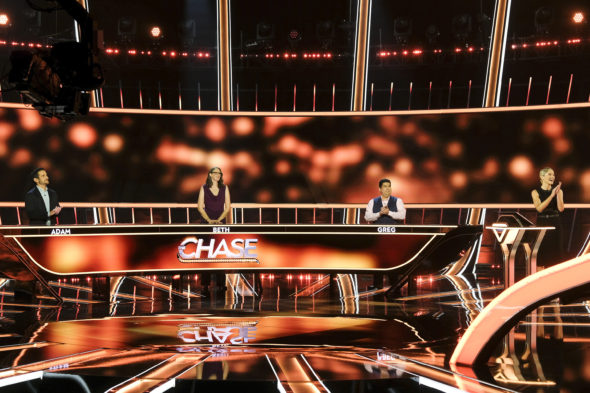 Who’s the most formidable Chaser? Has The Chase TV show been cancelled or renewed for a second season on ABC? The television vulture is watching all the latest cancellation and renewal news, so this page is the place to track the status of The Chase, season two. Bookmark it, or subscribe for the latest updates. Remember, the television vulture is watching your shows. Are you?

Airing on the ABC television network, The Chase TV series is hosted by Sara Haines. The game show is a fast-paced competition where three competitors must pit their wits and face off against the Chaser, a ruthless quiz genius who is determined to stop them from winning cash prizes. Each episode, contestants are challenged to think faster than they ever thought possible, to answer up to 166 questions across all topics. Trivia masters James Holzhauer, Ken Jennings, and Brad Rutter take turns serving as the Chaser.

The first season of The Chase averaged a 0.69 rating in the 18-49 demographic and 4.67 million viewers. Find out how The Chase stacks up against other ABC TV shows.

Will ABC cancel or renew The Chase for season two? The show seems relatively inexpensive to produce and the title has some cache with viewers so, I’m leaning toward a renewal. That being said, the network has a lot of game shows right now. I wouldn’t be surprised if some of them get cut once the pandemic subsides. I’ll update this page with breaking developments. Subscribe for free alerts on The Chase cancellation or renewal news.

What do you think? Are you glad that The Chase TV show has been renewed for a second season? How would you feel if ABC had cancelled this TV series, instead?

Love the Chase. Better than Jepordy

I love ‘The Chase’ and hope that it continues for a long time!

Love The Chase. First saw the British version when visiting Ireland a couple of years ago and was very excited that it was coming to the US. Hope ABC continues to renew it!

The Chase was a gameshow I really enjoyed watching. I hope it doesn’t get cancelled, & returns to U.S. network television soon