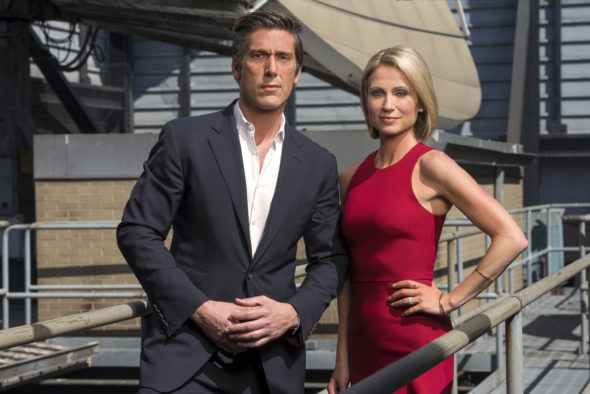 What’s the breaking news? Is the 20/20 TV show cancelled or renewed for a 42nd season on ABC? The television vulture is watching all the latest cancellation and renewal news, so this page is the place to track the status of 20/20 season 42. Bookmark it, or subscribe for the latest updates. Remember, the television vulture is watching your shows. Are you?

Airing on the ABC television network, 20/20 is a primetime news magazine, which combines investigative news reports with human interest stories and other features. Journalists David Muir and Amy Robach currently anchor 20/20 for ABC News. Roone Arledge created 20/20, which first premiered in June of 1978. Anchor Elizabeth Vargas departed at the end of season 40.

Will 20/20 be cancelled or renewed for season 42 on ABC? The show’s performance has dropped off quite a bit over the past few seasons, but networks have different standards for their news programming. The ratings are up this season so it is most likely to be renewed for 2019-20. For now, I’ll keep an eye on the Nielsens and update this page with breaking developments. Subscribe for free updates on any 20/20 cancellation and renewal news.

What do you think? Are you happy the 20/20 TV show was renewed for a 42nd season? How would you feel had the network cancelled this TV series, instead?

I don’t know why they put 2020 in the TV schedule when it’s not even on. it hasn’t been on for weeks although every guide I’ve looked at it’s supposed to be on so don’t put it on there if it’s not going to be on. It’s getting mighty ridiculous!!!!!!!!!!!!!!

This years show is terrible, Tara Banks is an horrible Host. Sorry you ruined the show this year!

I enjoy this show, sometimes very interesting, But I like the other woman better, Vagus?