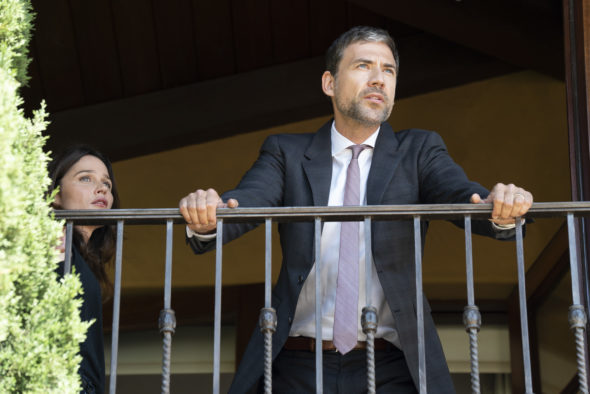 Is the fix in? Has The Fix TV show been cancelled or renewed for a second season on ABC? The television vulture is watching all the latest cancellation and renewal news, so this page is the place to track the status of The Fix, season two. Bookmark it, or subscribe for the latest updates. Remember, the television vulture is watching your shows. Are you?

An ABC legal drama anthology, The Fix stars Robin Tunney, Adewale Akinnuoye-Agbaje, Scott Cohen, Adam Rayner, Merrin Dungey, Breckin Meyer, Marc Blucas, Mouzam Makkar, and Alex Saxon. The first season centers on former prosecutor Maya Travis (Tunney) who, in 2010, was unable to convict movie star Sevvy Johnson (Akinnuoye-Agbaje) in the double-homicide of his wife and her friend. After the trial, Maya fled LA, but now that Sevvy’s girlfriend has been killed, she’s lured back into action, for another shot at justice.

The first season of The Fix averaged a 0.49 rating in the 18-49 demographic and 3.09 million viewers. Find out how The Fix stacks up against other ABC TV shows.

Will ABC cancel or renew The Fix for season two? The ratings are quite low so I don’t see this series landing a renewal. I’ll keep an eye on the ratings and update this page with breaking developments. Subscribe for free alerts on The Fix cancellation or renewal news.

5/10/2019 Status Update: The Fix has been cancelled; there will be no season two. Details here.

What do you think? Did you hope The Fix TV show would be renewed for a second season? How do you feel now that ABC has cancelled this TV series, instead?

There should be second season

cant believe that a second series of the fix was in doubt it is an amazing series watched all ten episodes in 2 sittings.

How can you cancel The Fix. It was so good. After every episode i couldn’t wait for the next. Please bring back another season.

This is one of the BEST shows on television in the last decade. Really bummed that it’s been cancelled. Maybe Season 2 should be considered with stronger promotions .. to encourage more viewers ‍♀️

I liked this show, had a certain twist and never knew what was going to happen. Disappointed it isn’t going to be a season 2!

I wish it hadn’t got cancelled , I really got into it and then bump no new seasons… Please listen to the viewers and bring the show back…

Why is this show cancelled? Give it a chance it’s a good show!! Very disappointing!!R3Lj

I am so disappointed The Fix has been cancelled. Great show. It is a shame that they do not give it another season. I am going to miss this one for sure.

I really enjoyed The Fix as it is a short series they comes The a quick conclusion, like a book, and doesn’t drag on. This series kept you in suspense right up to the final episode.
Maybe better advertising may have gotten more watchers.

I am extremely disappointed that The Fix will not be returning. It kept you in suspense right up to the last episode.
I enjoy short series as they come to a quick conclusion, like a book, and you’re not waiting forever for the end.

In my and my wife’s opinion The Fix should most definitely continue formr a second season. We watched the entire season and could not wait from episode to episode to see how the plot would unravel. The acting was superb. We are saddened to see it end.

The Fix was Fantastic! Can’t believe people didn’t watch it! We want a season two! Quit getting rid of good shows.

VERY sad to see The Fix has been cancelled. I thought it was great! Bravo, Marcia Clarke!!