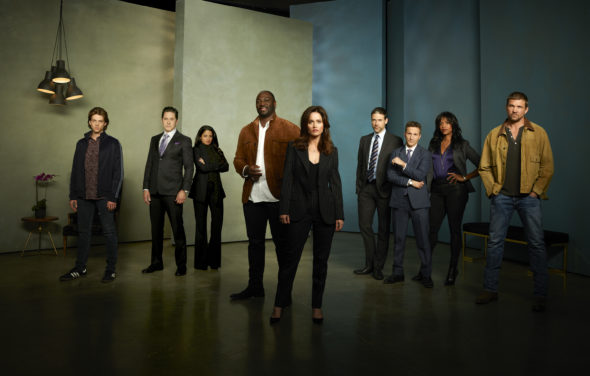 TV show description:
From creators Marcia Clark, Elizabeth Craft, and Sarah Fain, The Fix TV show is a legal anthology drama set in Los Angeles. The series centers on attorney Maya Travis (Tunney), once an L.A. district attorney, whose career was derailed in 2010, after she failed to score a double-murder conviction against movie star Severen “Sevvy” Johnson (Akinnuoye-Agbaje).

After her defeat, Maya left Tinsel Town and decamped to rural Washington state. Now, eight years after the first trial, she still dreams about the victims, so she goes to California to consult for a few days, in hopes of finding something in her old case files which might connect Sevvy to the recent death of his girlfriend, Jessica (Kalupa).

For his part, Sevvy maintains his innocence of both the old murders and the new. Jessica’s family, however, is certain he is guilty. Meanwhile, his former attorney, Ezra Wolf (Cohen) is just trying to convince him to keep a low profile and stay out of trouble.

Deputy D.A. Matthew Collier (Rayner) wants a chance to search Johnson’s house, and for that, he needs probable cause. He has teams of investigators looking into other leads, but he’s brought Maya on specifically to look at Johnson. He wants her to find a pattern or something which links the crimes. Maya though, can’t help but wonder if Johnson is dumb enough to kill again.

Everything changes when Sevvy walks into the police station and declares himself an open book who is ready to talk to the police about anything. As Maya watches from the observation room, she realizes the detectives are letting him control the interview and sends a note instructing them to throw him off balance. It doesn’t take Sevvy long to figure out she’s back and on the case and his case.

Wolf knows Maya’s return spells trouble for him and makes that clear to the rest of Johnson’s defense team, and everything isn’t sunshine and roses for their side. A gambler, Wolf has racked up some serious debt, and his lenders don’t keep bankers’ hours. Meanwhile, Sevvy’s mercenary ex-wife, Julianne (Robin Givens), is willing to present a united family front — for a price, while their daughter, Star (Harmon), wonders if she should feel guilty for introducing her dad to Jessica.

Collier is working Maya hard to get her back for more than a brief consult, but she left some bridges in disrepair, if not burnt, and not everyone is thrilled that she’s back. Old friend and colleague CJ (Dungey) felt totally abandoned when Maya essentially disappeared after the first trial and still seems to hold a grudge. Then there’s Loni Kampoor (Makkar), the initial lead for the prosecution on this new case, who feels threatened enough by Maya’s return to sabotage things.

Meanwhile, Jessica’s father, John (Christopher Curry), holds Maya responsible for Sevvy’s earlier acquittal, so he also blames her for his daughter’s death. On top of that, the media is hounding her, and she misses life in Washington, with her boyfriend Riv (Blucas). She’s ready to run back to her new home until she discovers convincing evidence that Sevvy abused Jessica, which is part of his pattern with women. Maya can’t turn up this chance at justice — but at what cost? Stay tuned.

Series Finale:
Episode #10 — Making a Murderer
Questions are answered as a conviction is made in the murder of Jessica Meyer.
First aired: May 20, 2019.

What do you think? Did you like The Fix TV series? Should this ABC TV show have been cancelled or renewed for season two?

You get us hooked on a great show and then take it away? Not fair! Loved this show! Please bring back.

Wow, why put so much into airing if you don’t let it play through. As a woman in the legal field, I found this show to be riveting and exciting. There are more reality shows of stupid stuff than real brain entertainment.
Bring it back and give the other half of the population some excitement too.

I thought it was great, and am very sad to see it cancelled. Maybe they should have called it a ten part mini-series. It kind of had that feel.

Would love to see this renewed – can’t really figure out what they would do with it though. Maybe each season could be a new criminal with a new crime?

Fascinating drama line. Actors have created believable characters. Interpersonal relationships are totally believable in the atmospherical environment that is portrayed.
We will miss the series.
Only criticism is Sevvy. Most often he came across as mumbling and most of his lines were unintelligible. It was primarily a problem of tone, British accent and bad enunciation. His acting was fine and he communicated emotion well but he just didn’t project his lines well. I wonder is others have this criticism too.

loved robin tunney don’t give a d23d r3t’s a33for the rest of the show. why did they cancel the MENTALIST?!

Thius show needed to be canceled. There was some seriously bad acting by some of the cast. Robin Tunney, Robin Givens (seriously, Robin Givens?), Breckin Meyer. Also, it had a shallow story. It won’t be missed.

Please renew..they always seem to cancel the good shows and keep the bad ones on..me and my gf love this show..someone needs to start a petition

Yes, and my sister never watches crime dramas and she is really into this show and we were looking forward to next season

I love the show! One of the best on TV==Can’t believe it has been cancelled. Try a different time period maybe. Its exciting, lots of unexpected happenings. Excellent writing. Actors are super!