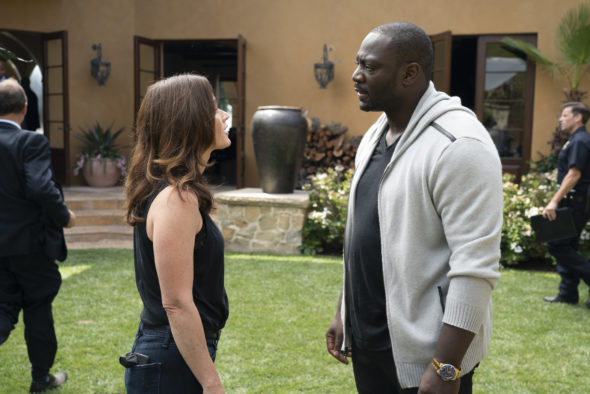 Are you as fixated on the first season of The Fix TV show on ABC as Maya Travis is on Sevvy Johnson? As we all know, the Nielsen ratings typically play a big role in determining whether a TV show like The Fix is cancelled or renewed for season two. Unfortunately, most of us do not live in Nielsen households. Because many viewers feel frustration when their viewing habits and opinions aren’t considered, we’d like to offer you the chance to rate all of The Fix season one episodes here. **Status update below.

An ABC legal anthology drama, The Fix stars Robin Tunney, Adewale Akinnuoye-Agbaje, Scott Cohen, Adam Rayner, Merrin Dungey, Breckin Meyer, Marc Blucas, Mouzam Makkar, and Alex Saxon. The first season centers on former prosecutor, Maya Travis (Tunney) who, in 2010, was unable to convict movie star Sevvy Johnson (Akinnuoye-Agbaje) in the double-homicide of his wife and her friend. After the trial, Maya left LA, but now that Sevvy’s girlfriend has been killed, she’s lured back into action, for a second shot at justice.

What do you think? Which season one episodes of The Fix TV series do you rate as wonderful, terrible, or somewhere between? Should ABC have cancelled or renewed The Fix for a second season? Don’t forget to vote, and share your thoughts, below.

Please keep this show going, I was hooked from the start and have just watched the final episode, this show is intriguing, captivating and all the twists and turns kept you on the edge of your seat, surely there are other stories the producers can come up with to create more seasons.
Why do all the hood shows get cancelled after one season is beyond me
Please bring this back to our screens ASAP

Please bring the fix back it was a great show!

Please bring the fix back it was a great show!!

I love this so show and looked forward to watching it each week. So upset its canceled!

I am sad that The fix has been cancelled Love,Love,Loved this show.

Me and my hubby love this show!its new and refreshing , it keeps the heart pumping! The only thing is it dragged out to long to get answers ! But next week we will know I hope! We just need to know who killed Jessica! I hope it isn’t like OJ and no one knows! I love all the actors ! I hope they give it at least one more season!! I DVR this show and many shows so I can watch commercial free so I hope I count in the ratings !!!!

I really like this show. I must admit that I don’t really care for Robin Tunney though. I never have. I didn’t like her at all in The Mentalist but I LOVED the show because of Simon Baker!!!! I think if she got replaced along with the other attorney who has the hots for her it would be a much better show. I really like the other 2 lady attorneys that work under Robin!!! Especially the one that plays her best friend!!! She’s got fire!!! Anyways, just a thought.

Cancel now. Gets more boring with each episode.

The Fix keeps you on the edge of your seat and has some great twists and turns. It’s my favorite new show.

The show was OK, but it keeps reminding me of OJ Simpson and I think Marcia could have done better than this. The lead character seems contrived. Meanwhile I will keep watching it until I get bored with it. Not the best series I’ve seen as yet.