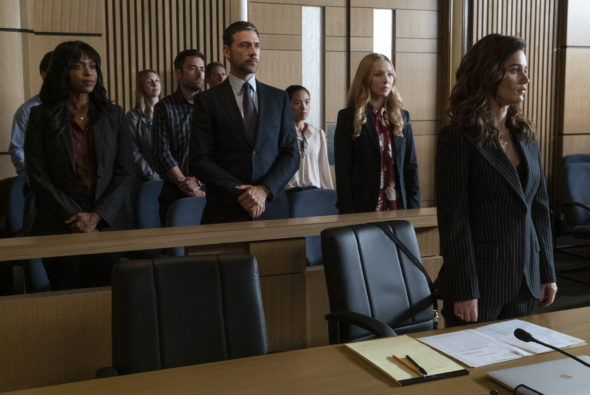 It’s judgement day for The Fix TV show on ABC. The alphabet network has cancelled the freshman series so there won’t be a second season.

A legal drama anthology, The Fix stars Robin Tunney, Adewale Akinnuoye-Agbaje, Scott Cohen, Adam Rayner, Merrin Dungey, Breckin Meyer, Marc Blucas, Mouzam Makkar, and Alex Saxon. The first season centers on former prosecutor Maya Travis (Tunney) who, in 2010, was unable to convict movie star Sevvy Johnson (Akinnuoye-Agbaje) in the double-homicide of his wife and her friend. After the trial, Maya fled LA, but now that Sevvy’s girlfriend has been killed, she’s lured back into action, for another shot at justice.

While the first season is close-ended, the show’s creators have said that The Fix was not intended as a mini-series. Had the show been renewed, some of the characters would have returned to work on a new case.

The series finale of The Fix airs on May 20th.

What do you think? Do you enjoy the The Fix TV show? Would you have watched season two of this ABC comedy series?

I loved season 1. I woild have conti ued to watch this series. I had never heard of it and came across it yesterday.

I just watched this and disappointed that it has been dropped

I definitely wanted a 2nd season for The Fix. It was an intriguing storyline and I was very disappointed it was canceled. Bring it back!

Bring it back. Better then those stupid reality shows

Please bring The Fix back! My husband and I love this series!

I really loved “The Fix series”. Please bring it back.

Absolutely loved this show! How shameful for them not to have done a new season! I really love shows like these. They should look at how many people actually enjoyed/loved this show and they should really consider having another season.

I liked the show. Shame it won’t be renewed.

Yes, please bring “The Fix” back. The show was interesting and intelligent, with some good twists. I love when I can’t figure out “who done it” in the first few episodes.

This show was fun to watch…and I watched it. Now they’re going to put another bull+$*& reality show on.

I more than loved it. ….was cool

Love the show. Bring it back