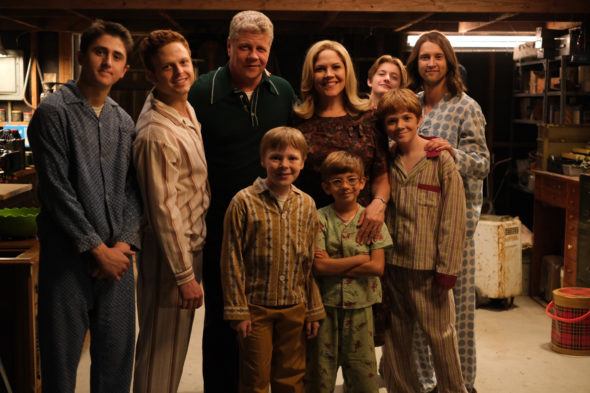 ABC isn’t keeping the Clearys’ show in the family. The alphabet network has cancelled The Kids Are Alright TV series so there won’t be a second season.

The Kids Are Alright stars Michael Cudlitz, Mary McCormack, Sam Straley, Caleb Foote, Sawyer Barth, Christopher Paul Richards, Jack Gore, Andy Walken, and Santino Barnard. The 1970s-period comedy centers on the Clearys, an Irish-Catholic family living on the outskirts of Los Angeles. Since its the ’70s, Peggy (McCormack) and Mike (Cudlitz) are raising their kids with a lack of supervision which might stun today’s parents, and now their eldest son wants to quit the seminary to go “save the world.” The times they are a-changing, and the Cleary family is not immune to the turbulence around them.

Airing on Tuesday nights, the first season of The Kids Are Alright is averaging a 0.87 rating in the 18-49 demographic and 4.15 million viewers.

Out of the 21 scripted ABC TV shows of the 2018-19 season, The Kids Are Alright is in 11th place in the demo and 10th place in total viewership.

“The Kids Are Alright” is dead. I just got the call. Goodbye. #TheKidsAreAlright ⁦@TheKidsABC⁩ pic.twitter.com/BsTTd7r2mG

What do you think? Did you enjoy The Kids Are Alright TV show? Would you have watched season two of this ABC comedy series?