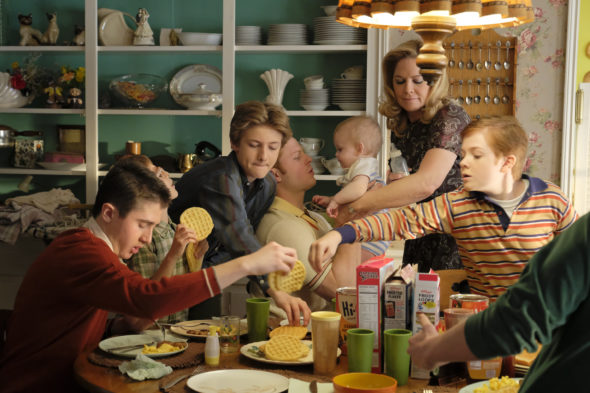 Are the Clearys any better than just “all right” during the first season of The Kids Are Alright TV show on ABC? As we all know, the Nielsen ratings typically play a big role in determining whether a TV show like The Kids are Alright is cancelled or renewed for season two. Unfortunately, most of us do not live in Nielsen households. Because many viewers feel frustration when their viewing habits and opinions aren’t considered, we’d like to offer you the chance to rate all of The Kids Are Alright season one episodes here. **Status update below.

What do you think? Which season one episodes of The Kids Are Alright TV series do you rate as wonderful, terrible, or somewhere between? Should ABC have cancelled or renewed The Kids are Alright for a second season? Don’t forget to vote, and share your thoughts, below.

**5/10/2019 Status Update: The Kids Are Alright has been cancelled. There will be no season two. Details here.

I would write every day if it would make a difference and you’d change your mind about canceling one of the best shows on TV. I’ve already written a few times. It STILL sickens me this FANTASTIC show was canceled as I feel it was one of the absolute best shows on TV. Clever FRESH writing, a different subject matter, wonderful characters who I was so looking forward to watching progress. ABC did not give it enough time and they certainly didn’t promote it well. I just happened to see a commercial by chance. None of my friends had even… Read more »

The best show that I have seen in years! My husband and I absolutely love this show. You must bring it back. If you need to cancel a show how about The Conners. That show sucks.

WOW me and my whole extended family loved that show, guess its time to take you guys off our plan, no need for it anymore, you kick the good shows and keep the REALLY BAD ones..Bravo
ABC cancelled- Check

The best show ABC ever had, I’m so done with them.

Please someone pick up this amazing show! My husband and I LOVE “The Kids are Alright”, and we are devastated that ABC canceled this gem.

The Kids Are Alright is a great show – please find the kids a new home!!

Please bring back The Kids are Alright! I love this show.

Please bring back the kids are alright!
It was one of the best shows !
Bring it back!

PLEASE bring back kids are alright!
Best show in a long time and always makes us laugh and enjoy the whole cast.

please bring back the kids are alright. Very funny show. I enjoyed it every week.

Please bring back the kids are all right. Love this show.

Why would you cancel a show that everyone loves – too talented? too funny? too relatable??? C’mon ABC get your act together and keep the shows on that people actually enjoy watching and that have real talent – these kids are amazing – the parents are relatable and it’s the ONLY show I know of that everyone looks forward too! Hopefully another network will pick up the genius and the ratings of this show. What a waste of talent.