ABC has announced their schedule for Fall 2018. There are quite a few new shows on the way and the network is moving a bunch of their programs around. Of the three networks that have released their schedules so far, the alphabet network is making the most changes this fall — including two concurrent editions of the Dancing with the Stars franchise.

There’s no shortage of comedy shows on ABC’s schedule. They’ve got 10 of them slotted right now. It’s interesting that ABC is trying to once again establish a comedy block on Friday nights — just as FOX is doing the same thing with the revival of Last Man Standing (which used to air on ABC’s Friday night schedule).

Returning ABC shows for Fall 2018: 20/20, The Alec Baldwin Show (fka Sundays with Alec Baldwin), America’s Funniest Home Videos, American Housewife, Black-ish, Child Support, Dancing with the Stars, Fresh Off the Boat, The Goldbergs, The Good Doctor, Grey’s Anatomy, How to Get Away with Murder, Modern Family, Roseanne, Shark Tank, Speechless, Splitting Up Together, and Station 19.

New ABC shows for Fall 2018: Dancing with the Stars: Juniors, The Kids Are Alright, A Million Little Things, The Rookie, and Single Parents.

Here are the relevant portions of ABC’s press release:

NEW SHOWS
“A MILLION LITTLE THINGS”
They say friendship isn’t one big thing, it’s a million little things; and that’s true for a group of friends from Boston who bonded under unexpected circumstances. Some have achieved success, others are struggling in their careers and relationships, but all of them feel stuck in life. After one of them dies unexpectedly, it’s just the wake-up call the others need to finally start living. Along the way, they discover that friends may be the one thing to save them from themselves.

“THE ROOKIE”
Starting over isn’t easy, especially for small-town guy John Nolan who, after a life-altering incident, is pursuing his dream of being an LAPD officer. As the force’s oldest rookie, he’s met with skepticism from some higher-ups who see him as just a walking midlife crisis. If he can’t keep up with the young cops and the criminals, he’ll be risking lives including his own. But if he can use his life experience, determination and sense of humor to give him an edge, he may just become a success in this new chapter of his life.

“THE KIDS ARE ALRIGHT”
Set in the 1970s, this ensemble comedy follows a traditional Irish-Catholic family, the Clearys, as they navigate big and small changes during one of America’s most turbulent decades. In a working-class neighborhood outside Los Angeles, Mike and Peggy raise eight boisterous boys who live out their days with little supervision. The household is turned upside down when oldest son Lawrence returns home and announces he’s quitting the seminary to go off and “save the world.” Times are changing and this family will never be the same. There are 10 people, three bedrooms, one bathroom and everyone in it for themselves.

“SINGLE PARENTS”
This ensemble comedy follows a group of single parents as they lean on each other to help raise their 7-year-old kids and maintain some kind of personal lives outside of parenthood. The series begins when the group meets Will, a 30-something guy who’s been so focused on raising his daughter that he’s lost sight of who he is as a man. When the other single parents see just how far down the rabbit hole of PTA, parenting and princesses Will has gone, they band together to get him out in the dating world and make him realize that being a great parent doesn’t mean sacrificing everything about your own identity. 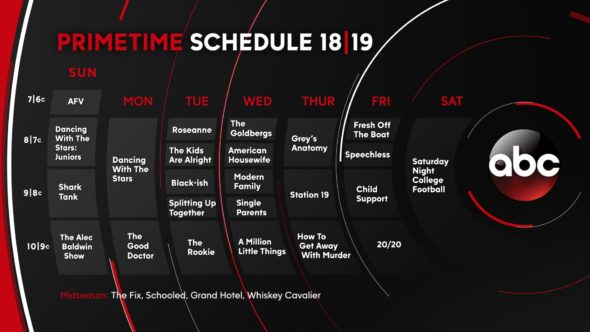 Check out how the ABC schedule lines up with the other networks’.

Keep up with all of the cancelled and renewed ABC TV shows on our status page.

You need to bring back more daytime stories. Enough with these talk shows. All my children or one life to live should be brought back. Or new ones. As well as the ones that are on now.

I was interested in The Kids are Alright as I grew up in a Catholic family of 5 kids in the ’70’s. I was disappointed when I watched a little of the first show. That was not how my family behaved. Surely there are enough escapades in a large family of boys that the writers could find some without having the father cuss and the mother seem so unconcerned about her children, and the children being mean to each other. That is not how most of the families I knew and know related to each other. I am sorry that… Read more »

ABC has honestly angered me. I will be avoiding ALL OF THEIR “NEW” SERIES. Sorry Nathan I refuse to commit my time to a show where I am vested in the charterers to have them CANCEL the show without giving them a chance to mature. Or have people aware of the show. I love a bit of SCI FI that dosen’t take off in space. We have MANY MYSTERIES ON EARTH AND I LOVE A TIME TRAVEL PROBABILITY. ONE OF THE BIGGEST MYSTERIES ON EARTH-TIME! So ABC can stick it in their ears! I will NOT BE WATCHING ANY SERIES!

The Chew, really? While I didn’t care for the cast, it was the best noon show.

ABC has really hit rock bottom. The only show I was watching prime time was Designated Survivor, what’s the problem? Daytime? I used to watch All My Children & One Life to Live along with General Hospital which I still watch. No clue why they axed Nashville, at least CMT picked it up for a while. And they should have been the network to do Dynasty 2.0 although I am glad they didn’t, it would only get cancelled sooner. I never liked reality TV and am so sick of the time allotted to Bachelor, Bachelorette, DWTS, etc. Daytime has never… Read more »

you really think we need another GMA show in the afternoon with 2 host who are already on the am show.? Worst part you canceled The Chew which is one of the best shows on your daytime schedule. So you cancelled the Chew so we can see more of GMA in afternoon. Bad move!!!

The Chew replaced All My Children and most of us soap fans are thrilled that nothing has been successful beyond the soaps during those 2 hours. 1-3pm, EST shall always be cursed, rightfully so, forever. The Chew actually lasted much longer than expected.

Very pleased to see The Good Doctor and Roseanne renewed this next season. And…since I’m a Nathan Fillion fan, I will certainly check out The Rookie on Tuesday nights. Thanks for the update!

wow, the only thing I’ll be watching is Dancing with the Stars

Nothing to get excited over.

Sharon Steiner
Reply to  Why Watch

I will ,from here on out, never watch abc again because of what they did to roseanne . not even the conners. too bad some show (greys ) I have watched from the git and will stop (they are a bunch of leftists any way) PS I have found a channel that airs roseanne reruns