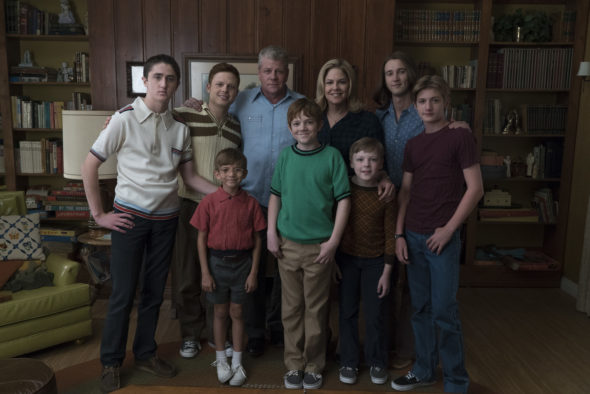 TV show description:
From creator Tim Doyle, The Kids Are Alright TV show is an ensemble sitcom, set in the 1970s. The series follows the Cleary family, a traditional Irish-Catholic clan, as they live out their lives amidst the upheaval of the 1970s.

The story unfolds in a great Los Angeles working-class neighborhood. The family is headed up by married couple Peggy (McCormack) and Mike Cleary (Cudlitz), who are raising eight rowdy and energetic sons. Because this is the 70s, the boys live most of their lives outside, and they do so with a lack of supervision that might cause modern helicopter parents to faint.

Their lives are chugging along more as less as expected, until the Clearys’ eldest son, Lawrence (Straley) comes home to announce he’s quitting the seminary. Instead of pursuing the priesthood, he wants to embark on a mission to “save the world.” Mike and Peggy never expected to be raising their brood in such turbulence, but as the song goes, the times they are a-changing.

Series Finale:
Episode #23 — Irish Goodbye
Peggy struggles with Lawrence’s decision to move out of the house, especially after she discovers that he is secretly moving in with a girlfriend she’s never met. Lawrence’s determination to keep Peggy out of his personal life only causes her to investigate further, while Mike welcomes his departure. Meanwhile, Timmy can’t find his ventriloquist dummy, Knuckles, and learns that Joey took him without asking.
First aired: May 21, 2019.

What do you think? Do you like The Kids Are Alright TV series? Should this ABC TV show have been cancelled or renewed for season two?

Love it, I hope it comes back. I grew up in the 70’s Brought back wonderful memories!!

Intelligent, witty, well-written, well-acted, and insightful, what isn’t there for the execs at ABC to cancel?

I was looking forward to the next season. I was disappointed that this amazing show was gone . It took me back to being young again . the boys and the mom love love love it please bring it back

I loved this show, too bad! It was so clever.

I am disappointed in the cancellation of this show. the cast was amazing and not a week went by with out some good humor and laughs. I looked forward to see what the mom would do each week and how she would plot and scheme to get her way. Bring this show back huge mistake to cancel yet another fun light hearted show without candid laughter.