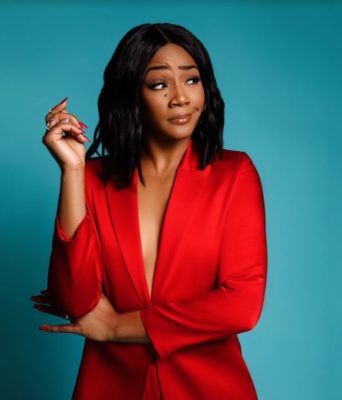 ABC is bringing a classic back. The network just announced they’ve ordered a reboot of Kids Say the Darndest Things with Tiffany Haddish.

A reimagining of the ’90s TV show, the variety series “will capture Haddish’s unique voice and sensibility as she interacts with real kids – and their innocently entertaining points of view.”

Kids Say the Darndest Things is slated to debut on ABC this fall.

ABC announced today that the network has picked up a new iteration of the classic variety show “Kids Say the Darndest Things,” hosted and executive produced by comedic superstar Tiffany Haddish. The hilarious reimagined format showcases a mix of in-studio segments and taped pieces from across the country, all set in front of a live studio audience. The series will capture Haddish’s unique voice and sensibility as she interacts with real kids – and their innocently entertaining points of view. “Kids Say the Darndest Things” will air Sundays at 8:00 p.m. EDT during ABC’s fall prime-time schedule, providing a solid three-hour block of family-fun programming, starting with “America’s Funniest Home Videos” at 7:00 p.m. EDT and continuing with “Shark Tank” at 9:00 p.m. EDT.

Each episode highlights the comedic perspectives of a diverse group of kids in segments, such as “Kids Rule,” in which kids explain to Tiffany the rules for everything from sportsmanship to dating; “Love Talk,” where Tiffany seeks advice on her love life; “Best Carpool Ever,” with Tiffany taking on carpool duty with a minivan full of kids; “Granny Tiff,” when Tiffany, in prosthetics and dressed up as an older woman, receives technology advice from the kids; and more.

“I’m excited to hear what kids have to say these days because I can’t understand what they are saying on social media,” said Haddish. “They’re using too many abbreviations!”

“When I was dreaming of stars I wanted to bring to ABC, Tiffany Haddish was top of my list,” said Karey Burke, president, ABC Entertainment. “Tiffany starring in and producing this iconic series is everything I hoped for.”

“‘Kids Say the Darndest Things’ has been part of our Studio family since Art Linkletter created the segment for his ‘House Party’ series way back in 1945,” said David Stapf, president of CBS Television Studios. “It’s a warm and funny family program that is sure to provide both tears and peals of laughter to viewers of all ages. We are delighted to join ABC and Tiffany in bringing an all-new version to air next season.”

Tiffany Haddish has quickly established herself as one of the most sought-after comedic actresses and performers. She can currently be seen opposite Tracy Morgan on the TBS comedy series “The Last O.G.” and can be heard as the voice of “Tuca” on the Netflix animated series “Tuca and Bertie.” She will next appear in starring roles in the films “The Kitchen” and “Limited Partners,” and will lend her voice to Universal/Illumination’s” The Secret Life of Pets 2.” Her additional projects in development and/or production include “Down Under Cover,” “Tiffany Haddish Presents: They Ready,” and her own one-hour stand-up comedy special which is set to debut on Netflix later this year.

Produced by CBS Television Studios in association with Anvil 1893 Entertainment, Inc. and She Ready Productions, “Kids Say the Darndest Things” is executive produced by Eric Schotz and Tiffany Haddish.”

What do you think? Are you a fan of the original Kids Say the Darndest Things? Will you watch the reboot?

I love the show kids say the darndest things. How can I get on t his show. I have a nephew 6 years old

I have ABSOLUTELY NO INTENTIONS of watching this reboot. ABC already canceled one of the only 2 good shows they had THE KIDS ARE ARIGHT! No interest in watching a stale remake of a show that wasn’t that funny the first time around. ABC has nothing new to offer.

I watch the original one and thought it was really funny so hopefully this will be even better!!

The host should be replaced. She makes it all about herself and some of the kids appear to be coached. I
My friends and I will not watch it unless changes are made.