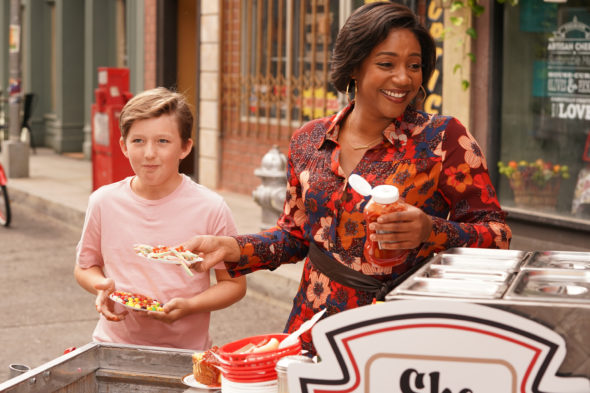 An improv/sketch comedy series, Kids Say the Darndest Things is based on the CBS program that was hosted by comic Bill Cosby (1998-2000). That series was based on a feature of Art Linkletter’s House Party radio show (1945-67) and the television program that followed, Art Linkletter’s House Party (1952-69). In the reimagined format, in-studio segments and taped pieces from across the country are played out in front of a live studio audience. Host Tiffany Haddish interacts with real kids who often have their own innocently entertaining points of view. Each episode includes several different segments with children with diverse backgrounds and unique perspectives.

What do you think? Do you like the Kids Say the Darndest Things TV series on ABC? Should it be cancelled or renewed for a second season?

*12/18/20 update: Kids Say the Darndest Things was cancelled by ABC but was later revived by CBS.

Cancelled, it has too many bad reference for kids that age! And it looks and sounds scripted.

No, KSTDT should NOT be renewed. It’s more about the hostess than about the kids. It seems to me that many scenes are scripted. Art Linkletter must be spinning in his grave.

Host Tiffany uses the show more for self-promotion than focus on kids.

We enjoy this show, it’s nice to watch, laugh, laugh and laugh some more. Laughter is good for everyone. The kids are adorable and certainly do say the funniest things. Love it.

PLEASE CANCEL THIS! It’s awful & I’m old enough to remember the original with Art Linkletter. This is not in the least the same or even good tv viewing.

Horrible, trashy, and in poor taste. We will NOT be watching it. It is not family friendly! Bring back the original one that was done in a classy way. Show some class ABC. We don’t need to sexualize everything. Keep it funny without going there.

ABC has a habit of keeping really awful programs & I can’t imagine why! There are only 3 shows we watch on ABC & this certainly is NOT one of them.

The first show was a disaster. The kids were urged to bolster Tiffany’s giant ego. The kids were merely props in her self-aggrandizing theatrics. Hopefully the youngsters will be allowed to shine on future episodes.