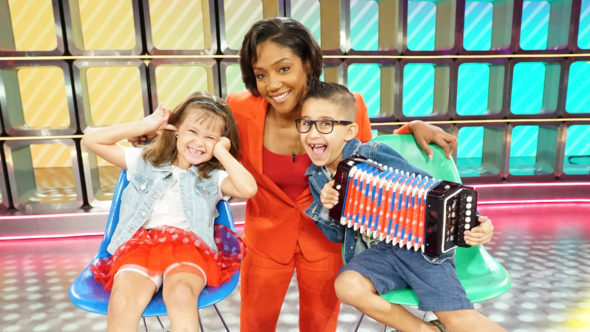 Some bad news for fans of Kids Say the Darndest Things. ABC just revealed they’ve cancelled the TV show after only one season.

A reboot of the late ’90s and Art Linkletter program, the Kids Say the Darndest Things series features in-studio segments and taped pieces from across the country are played out in front of a live studio audience. Host Tiffany Haddish interacts with real kids who often have their own innocently entertaining points of view.

The first season of Kids Say the Darndest Things averaged a 0.58 rating in the 18-49 demographic and 3.64 million viewers. That makes the reboot one of ABC‘s lowest-rated non-scripted series for the 2019-2020 season.

What do you think? Did you watch Kids Say the Darndest Things on Sunday nights? Would you have watched a second season on ABC?

Glad it was cancelled. Tiffany made extremely inappropriate jokes with sexual innuendos. Hope she isn’t allowed around kids much.

I truly loved watching this show!! Tiffany Haddish is hilarious with the kids!! Sad to see it go

Had zero interest in watching this reboot…Tiffany Haddish is no Art Linkletter.

It didn’t interest me one bit… so tired or shows being rerun. It’s like no one has any imagination. Won’t miss what I didn’t watch.

I am so sad to hear it is being canceled. I watched every episode and loved the show, especially Tiffany. It was a great family show and very funny.

I’m sad that”kids say the darndest things with Tiffany Haddish” was cancelled. I liked the way she interact with the kids (she’s just a big kid herself). You always cancel the good shows and leave the trashy/garbage shows on…. Smh!!!!

This was the only show from ABC’s cancelled list that I did not watch at all. I watched when Art Linkletter was doing his version, but I was 5 years old at the time… Go figure.

I am very disappointed you are not bringing this show back. I think she did a great job with the kids and the kids are funny as hell. I hope you rethink about cancelling it and bring it back on the air.

They couldn’t get Bill Cosby to host again? Whatever happened to him? I don’t know, I’m asking.

You’re not serious, are you?

He got arrested for sexual assault

I’m actually sad to hear this. I liked it.