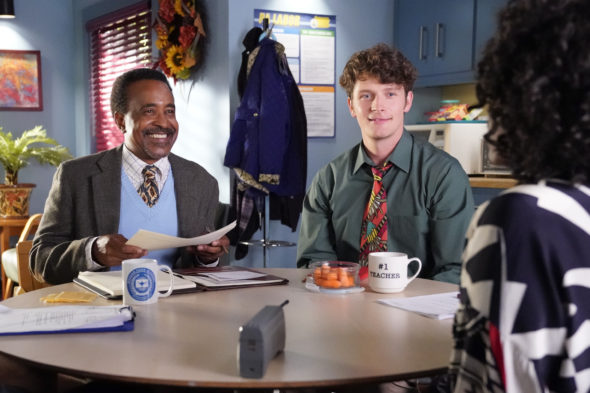 Is the second season of the ABC’s Schooled TV show making the grade? As we all know, the Nielsen ratings typically play a big role in determining whether a TV show like Schooled is cancelled or renewed for season three. Unfortunately, most of us do not live in Nielsen households. Because many viewers feel frustration when their viewing habits and opinions aren’t considered, we invite you to rate all of the season two episodes of Schooled for us here. *Status update below.

An ABC sitcom, Schooled is a spin-off of The Goldbergs and stars AJ Michalka, Tim Meadows, Bryan Callen, Brett Dier, and Haneefah Wood. Set at William Penn Academy in the 1990s, the series begins as Lainey Lewis (Michalka) returns to Jenkintown, Pennsylvania after pursuing her dreams of stardom on the West Coast. She reluctantly takes a job as a music teacher at her alma mater. She discovers that Rick Mellor (Callen) is still the gym teacher and John Glascott (Meadows) has become the new principal. She works alongside enthusiastic Charlie “C.B.” Brown (Dier) and Wilma (Wood), a new science teacher. Despite their eccentricities and crazy personal lives, these teachers remain heroes to their students.

What do you think? Which season two episodes of the Schooled TV series do you rate as wonderful, terrible, or somewhere between? Should ABC cancel or renew Schooled for a third season? Don’t forget to vote, and share your thoughts, below.

*5/21/20 update: Schooled has been cancelled on ABC so there won’t be a third season.

New shows most of them suck keep.schooled its funny and entertaining

I enjoy this show. I was recording this because i work during the show. I started watching this an liked the show in season 1. When i came home to watch what i recorded found out that schooled did not record made me sad . I look forward for this. I want to know will CB and Lannie get together. Maybe the reason why the ratings are down is because of the Mask Singer on fox

What happened to Kali Hawk? I tuned in thinking I would see her as Wilma but that didn’t happen. I’m bummed and I deleted the episode.