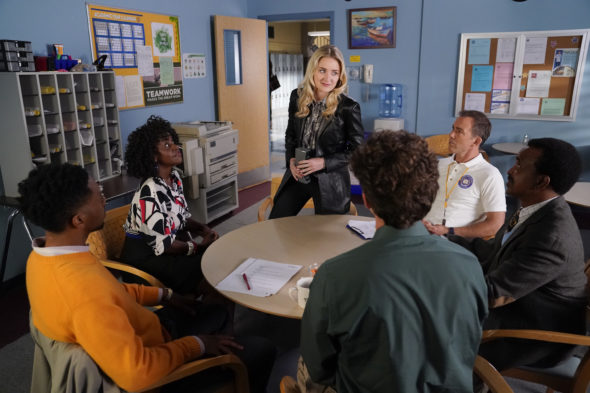 Is this sitcom a pass or a fail? Has the Schooled TV show been cancelled or renewed for a third season on ABC? The television vulture is watching all the latest cancellation and renewal news, so this page is the place to track the status of Schooled, season three. Bookmark it, or subscribe for the latest updates. Remember, the television vulture is watching your shows. Are you?

Airing on the ABC television network, Schooled is a spin-off of The Goldbergs and stars AJ Michalka, Tim Meadows, Bryan Callen, Brett Dier, and Haneefah Wood. Set at William Penn Academy in the 1990s, the series begins as Lainey Lewis (Michalka) returns to Jenkintown, Pennsylvania after pursuing her dreams of stardom on the West Coast. She reluctantly takes a job as a music teacher at her alma mater. She discovers that Rick Mellor (Callen) is still the gym teacher and John Glascott (Meadows) has become the new principal. She works alongside enthusiastic Charlie “C.B.” Brown (Dier) and Wilma (Wood), a new science teacher. Despite their eccentricities and crazy personal lives, these teachers remain heroes to their students.

The second season of Schooled is averaging a 0.69 rating in the 18-49 demographic and 3.15 million viewers. Compared to season one, that’s down by 29% and 20%, respectively. Find out how Schooled stacks up against other ABC TV shows.

Will ABC cancel or renew Schooled for season three? The series is a middle-of-the-road performer so, these days, I think that’s enough to score a renewal. I’ll update this page with breaking developments. Subscribe for free alerts on Schooled cancellation or renewal news.

What do you think? Were you hoping that the Schooled TV show would be renewed for a third season? Are you sorry that ABC cancelled this TV series, instead?

So sorry to hear Schooled was cancelled. It was laugh-out-loud funny! Please consider renewing it.

So so so disappointed to learn schooled was canceled. My husband and I looked forward to that time every week. Coach Mellor and John the principal were the best. Please consider renewing. Please..

It’s a good show and not reality tv. There is an audience out there that wants sit coms.

It’s a good show that I enjoy watching. I would like it to come back for season 3 and beyond.

Don’t cancel Schooled. It is such a fun show!

I really love ❤️this show . It has humor ,romance and life lessons rolled in on show . Please don’t cancel it!