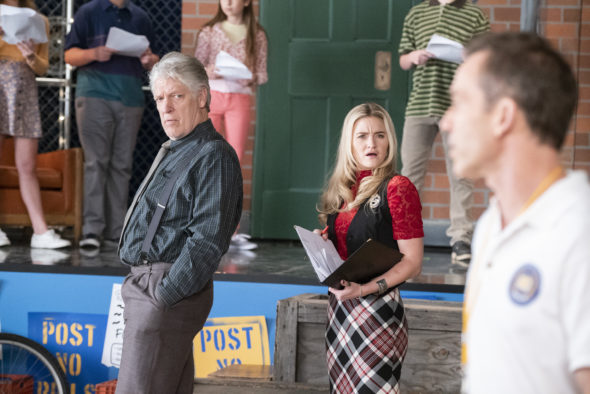 Did Lainey Lewis make the grade during her first year teaching at William Penn Academy? Has the Schooled TV show been cancelled or renewed for a second season on ABC? The television vulture is watching all the latest cancellation and renewal news, so this page is the place to track the status of Schooled, season two. Bookmark it, or subscribe for the latest updates. Remember, the television vulture is watching your shows. Are you?

A 1990s ABC sitcom, Schooled stars AJ Michalka, Tim Meadows, Bryan Callen, and Brett Dier. The series follows Lainey Lewis (Michalka) and the faculty of William Penn Academy. Although Lainey once matriculated there, she’s taking a detour from the pursuit of rock stardom and has returned to teach music. Even though Lainey her co-workers are riddled with quirks and personal problems of their own, the students look up to them as everyday heroes.

The first season of Schooled averaged a 0.97 rating in the 18-49 demographic and 3.94 million viewers. Find out how Schooled stacks up against other ABC TV shows.

Will ABC cancel or renew Schooled for season two? The ratings are mediocre but the network needs to establish new comedies so I’m leaning toward renewal. I’ll update this page with breaking developments. Subscribe for free alerts on Schooled cancellation or renewal news.

5/11/19 update: ABC has renewed the Schooled TV show for a second season.

What do you think? Are you glad that the Schooled TV show has been renewed for a second season? How would you feel if ABC had cancelled this TV series, instead?

It wouldn’t that much if Schooled was cancelled, it I also wouldn’t mind if they cancelled The Goldbergs.

I really hope there will be a season 2 of Schooled. I will be really upset if they cancel the show because it’s my favorite show other than The Goldbergs. Those two tv shows are the best that’s on cable tv & Hulu. ABC if you come across this please don’t cancel Schooled.

I’m wondering why ABC didn’t just show this pilot as well as the pilot that was filmed for Sue Sue in the City (The Middle spinoff with Sue Heck) and let the viewers (US, people) decide which show to go with? I was looking forward to, and very disappointed in, the Goldbergs spinoff, Schooled. Especially since this was the 2nd official attempt at a spinoff. I just wish that I were given the same opportunity to either love or hate Sue Sue in the City.