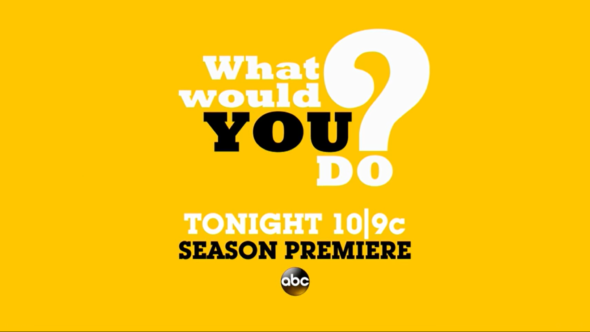 How far will John Quiñones and his crew go?  Has the What Would You Do? TV show been cancelled or renewed for a 17th season on ABC? The television vulture is watching all the latest cancellation and renewal news, so this page is the place to track the status of What Would You Do?, season 17. Bookmark it, or subscribe for the latest updates. Remember, the television vulture is watching your shows. Are you?

Airing on the ABC television network, What Would You Do? explores how people react to strangers in uncomfortable circumstances. With host John Quiñones and hidden cameras at the ready, actors play out various scenarios, in front of unwitting bystanders. The TV series delves into how and when people feel they must intervene and when and why they choose to mind their own business. Quiñones reports about how they made their decisions.

The 16th season of What Would You Do? averaged a 0.37 rating in the 18-49 demographic and 2.28 million viewers. Compared to season 15, that’s down by 11% in the demo and down by 8% in viewership. Find out how What Would You Do? stacks up against other ABC TV shows.

Will ABC cancel or renew What Would You Do? for season 17? The series seems relatively inexpensive to produce and it’s become a staple of the summer schedule but it seems like it’s becoming more difficult to come up with scenarios. I think that What Would You Do? will be renewed for a 17th season but I think ABC might want to replace it at some point in the next few years. I’ll update this page with breaking developments. Typically, ABC announces this show’s renewal a week or two before the new season debuts so we may not get official word until Summer 2021. Subscribe for free alerts on What Would You Do? cancellation or renewal news.

What do you think? Do you hope the What Would You Do? TV show will be renewed for a 17th season? How would you feel if ABC cancelled this TV series, instead?

As i watch this show, What would you do?It reminds me of how one day, The GREAT I AM will say, I have been watching and waiting for my people and welcome home or HE WILL SAY DEPART FOR I NEVER KNEW you.

The first new episode was great. It is amazing to see how the confederate flag brings out the worst in some people. I can’t wait to see the new episode.