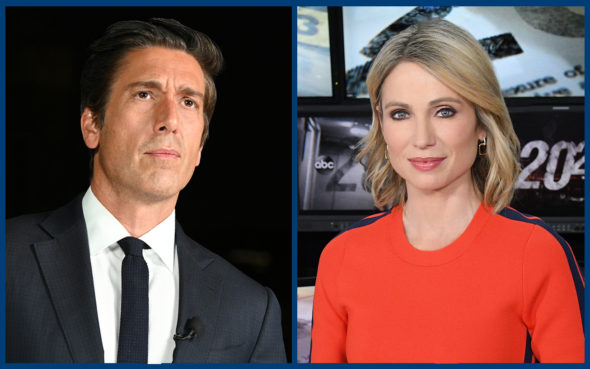 Will this show ever run out of stories? Has the 20/20 TV show been cancelled or renewed for a 45th season on ABC? The television vulture is watching all the latest cancellation and renewal news, so this page is the place to track the status of 20/20, season 45. Bookmark it, or subscribe for the latest updates. Remember, the television vulture is watching your shows. Are you?

Airing on the ABC television network, the 20/20 newsmagazine is anchored by journalists David Muir and Amy Robach. Correspondents include Juju Chang, John Quiñones, Deborah Roberts, Brian Ross, Diane Sawyer, and Jay Schadler. Created by Roone Arledge in June 1978, the program combines investigative news reports with human interest stories and other features. The venerable series’ name is derived from the 20/20 measurement of visual acuity.

The 44th season of 20/20 averages a 0.43 rating in the 18-49 demographic and 3.14 million viewers. Compared to season 43, that’s down by 9% in the demo and up by 4% in viewership in the live+same day ratings (including DVR playback through 3:00 AM). While these numbers don’t include further delayed or streaming viewing, they are a very good indicator of how a show is performing, especially when compared to others on the same channel. There can be other economic factors involved in a show’s fate, but typically the higher-rated series are renewed and the lower-rated ones are cancelled. Find out how 20/20 stacks up against other ABC TV shows.

Will ABC cancel or renew 20/20 for season 45? This show has been a staple of the network’s schedule for more than four decades and still performs pretty well. It’s also a familiar catch-all title that can be used for various ABC News specials. I can’t see it being cancelled anytime soon. I’ll update this page with breaking developments. Subscribe for free alerts on 20/20 cancellation or renewal news.

What do you think? Are you glad that the 20/20 TV show has been renewed for a 45th season? How would you feel if ABC cancelled this TV series, instead?

This is one of the very FEW shows that is real , no singing and dancing….so sick of those shows!!!!

This show needs to be limited to one hour. The two hour shows drag out unnecessarily with filler information that really isn’t relevant.