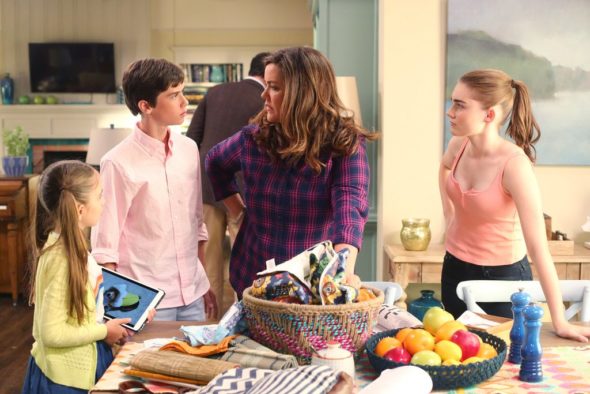 How long will the Ottos travel to the beat of their own drummer in Westport? Has the American Housewife TV show been cancelled or renewed for a third season on ABC? The television vulture is watching for the latest cancellation and renewal news, so this page is the place to track the status of American Housewife, season three. You can bookmark this page or subscribe for the latest updates. Remember, the television vulture is watching your shows. Are you?

Airing on the ABC television network, American Housewife stars Katy Mixon, Diedrich Bader, Meg Donnelly, Daniel DiMaggio, Julia Butters, Carly Hughes, and Ali Wong. The single-camera sitcom centers on Katie Otto (Mixon). As an average wife and mother, she prefers to stand apart from Westport CT’s “perfect” parents and their entitled children. Katie’s logic-driven husband, Greg (Bader), supports her efforts as best he can. Together, they try to make sure that their kids, Taylor (Donnelly), Oliver (DiMaggio), and Anna-Kat (Butters) internalize the family’s values, so they don’t end up carbon copies of their neighbors.

The second season of American Housewife averaged a 1.22 rating in the 18-49 demographic and 4.58 million viewers. Compared to season one, that’s down by 15% in the demo and down by 12% in viewership. Check out how American Housewife stacks up against other ABC TV shows.

Although the ratings are a bit lower than last year’s, I expect American Housewife to easily snag a third season renewal. I’ll keep an eye on the Nielsens and update this page from time to time. Subscribe for free updates on any American Housewife cancellation or renewal news.


What do you think? Should ABC have renewed its American Housewife TV show for a third season? Did you think it might be cancelled instead?

Love the show the Ottos are so funny

I hope it gets renewed! I watch online after new episodes get released, do online views get captured in ratings (hopefully they do!)?

I absolutely love this show, my family and I watch it every week, we call it our 1/2 hour of laughter! I hope this show gets renewed over and over for years to come, it is hilarious. Best show ever!! Thanks

I hope the show gets renewed. It is very funny & well acted. In addition what added to the show was when they adopted a pet pig.

This is an endearing show. It provides the laughs and heart you expect from a well-crafted sitcom and it’s a bit of a throwback to shows like, wait for it, Bewitched. Why Bewitched? Katie’s cutting against the grain of local society norms is akin to Samantha’s not having fit the typical suburbs of the 60s Also, they’re both set in leafy NY suburbs but shot on LA backlots that sometimes (often) betray their true location. March 21: I was concerned about the ‘It’s Hard to Say Goodbybe’ episode which seemed to close out too many story lines at once. I… Read more »

I love the show…please keep it going, more American Housewife!!!

Please keep the show!! I love to laugh and they are the funniest family tv show out there!

Oh yes, and I live in Westport Ma. Lol. We love this silly, funny, clever show with great casting and nice pet pig!!

Renew. I love an antihero as a main character.

I really liked it the first season, not so much the second. Did they get new writers? I don’t know, maybe they should make a dozen episodes for next season and bring it back as a mid season replacement. If it’s not any funnier then, cancel it.