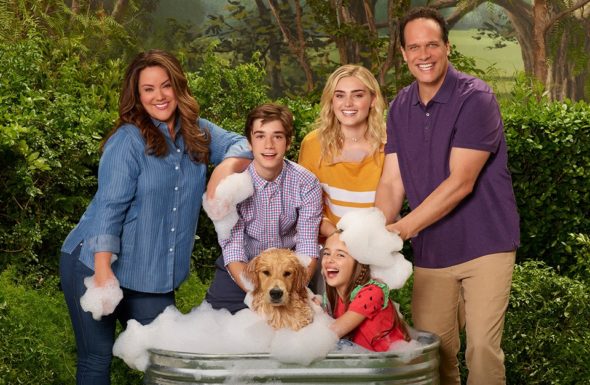 An ABC single-camera family comedy, American Housewife stars Katy Mixon, Diedrich Bader, Meg Donnelly, Daniel DiMaggio, Julia Butters, Carly Hughes, and Ali Wong. The sitcom centers on Katie Otto (Mixon), a confident and unconventional mother from the wealthy town of Westport, Connecticut. Katie wants to “keep it real” stand apart from her community’s “perfect” parents and their entitled children. Katie’s logic-driven husband, Greg (Bader), supports her efforts as best he can. Together, they try to make sure that their three kids — Taylor (Donnelly), Oliver (DiMaggio), and Anna-Kat (Butters) — understand their family’s old-fashioned values, so they don’t end up carbon copies of their neighbors.

What do you think? Which season four episodes of the American Housewife TV series do you rate as wonderful, terrible, or somewhere between? Do you think that American Housewife on ABC should be cancelled or renewed for a fifth season? Don’t forget to vote, and share your thoughts, below.

*5/21/20 update: American Housewife has been renewed for a fifth season on ABC.

This show is my favorite show I love all the actors and the story line please don’t cancel!

My fav sitcom. Love it.

Love the show! The family is hilarious as well as the show dealing with serious current issues.I never miss an episode and hope they keep it on for a long time.

I have to say that this season of American Housewife is amazing! I think episode 13 showed how much growth these characters gone through. I know lots of people think “agendas” are being thrown in but I am most impressed with Oliver this season. His reasons for “helping” may have been right in line with old Oliver, but he seems to genuinely care now and that is a huge step in an amazing direction for him. Thank you for including teen mental health and real issues in a show that is meant to be a comedy. It is really refreshing… Read more »

I love this show. My husband & I look forward to it every week. It is the only show we agree on. I’m so glad Katy Mixon got her own show after Mike & Molly (which I loved). Katy Mixon & Diedrich Bader are hysterically funny parents. The kids are great. I don’t want the kids to grow up because I don’t want this show to end.

I love this show so much!! And we can watch it as a family. I really hope its around longer.

I love this show, but I want to see more of Logan Pepper and Peyton Meyer as they and Oliver have incredible potential. Otherwise the show is great. Franklin and Anna-Kat look to be huge as the series continues.

Love the show American Housewife sure hope they don’t ruin it n take it off love Kate Mixon she’s a great down to earth actress was so mad when they cancelled Mike n Molly n left me only able to see reruns. But I love that show too so I’ll have to be happy I’m able to watch at least the reruns of Mike n Molly Please don’t do same to American Housewife I’d be so disappointed

I don’t watch this… Really can’t stomach the mother on here.

I don’t watch it at all

American Housewife is great! I love how the season opener focused on the changes the Ottos are going through. Looking forward for a great season!