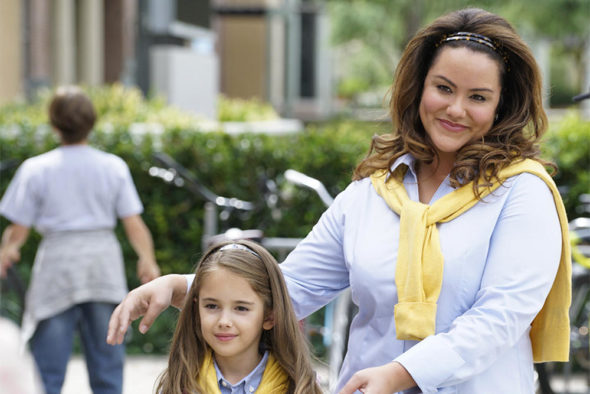 ABC believes in American Housewife. The network has renewed the Wednesday night TV show for a third season.

American Housewife stars Katy Mixon, Diedrich Bader, Meg Donnelly, Daniel DiMaggio, Julia Butters, Carly Hughes, and Ali Wong. The single-camera sitcom centers on Katie Otto (Mixon). As an average wife and mother, she prefers to stand apart from Westport CT’s “perfect” parents and their entitled children. Katie’s logic-driven husband, Greg (Bader), supports her efforts as best he can. Together, they try to make sure that their kids, Taylor (Donnelly), Oliver (DiMaggio), and Anna-Kat (Butters) internalize the family’s values, so they don’t end up carbon copies of their neighbors.

American Housewife: A Look at the Ratings

The second season of American Housewife is averaging a 1.22 rating in the 18-49 demographic and 4.58 million viewers. Compared to season one, that’s down by 15% in the demo and down by 12% in viewership.

In the demo, it’s ABC’s eighth highest-rated show. It’s number 10 in viewership. The network has a number of older sitcoms and needs to continue cultivating new comedies.

What do you think? Do you watch American Housewife? Will you watch season three of this ABC series?

When will season 3 come on

I love this show! Im ready for season 3 ! Their is just so many good qualities about it . very good choice on bringing it back!

Absolutely thrilled there will be another season. My entire extended family Loves it. They always say laughter is the best medicine and keeps you happy. We love all the laughs American Housewife gives us. Keep it showing: season 3, season 4, season 5 and on and on. Thanks ABC!

So happy there will be another season. One of my favorite shows.

One of the best shows around and so glad it is coming back for more.