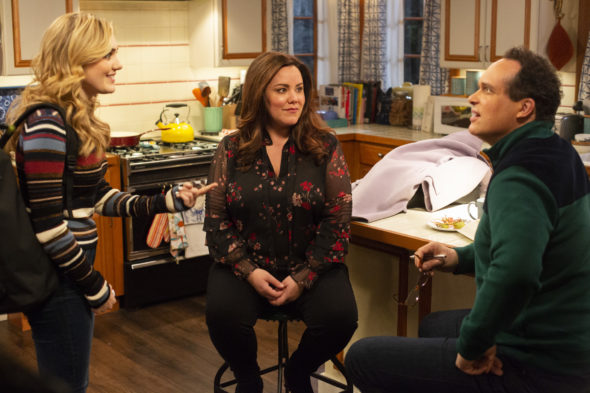 The ratings for American Housewife may not be “perfect” but ABC wants to keep the sitcom on the air. The alphabet network has renewed the series for a fourth season as part of their 2019-20 broadcast season.

A single-camera comedy, American Housewife stars Katy Mixon, Diedrich Bader, Meg Donnelly, Daniel DiMaggio, Julia Butters, Carly Hughes, and Ali Wong. The sitcom centers on Katie Otto (Mixon). As an average wife and mother, she prefers to stand apart from Westport CT’s “perfect” parents and their entitled children. Katie’s logic-driven husband, Greg (Bader), supports her efforts as best he can. Together, they try to make sure that their kids, Taylor (Donnelly), Oliver (DiMaggio), and Anna-Kat (Butters) internalize the family’s values, so they don’t end up carbon copies of their neighbors.

Airing on Tuesday nights, the third season of American Housewife is averaging a 0.94 rating in the 18-49 demographic and 4.20 million viewers. Compared to season two, that’s down by 23% and 8% respectively.

Out of the 21 scripted ABC TV shows of the 2018-19 season, American Housewife is in eighth place in the demo and viewership.

What do you think? Do you enjoy the American Housewife TV show? Will you be watching season four of this ABC comedy series?

I think this is a great show! I’ve enjoyed every season…. Looking forward to many more

Happy the show is still on. Love the show!

Love american housewife especially Anna kat. I’m glad it’s coming back.
However I will miss the kids are alright. It was a good show.
Is greys anatomy really that great of a show?

I love this show and love Katie. Hope it will stay on for a long time

I love this show. Katie is priceless and so is the whole cast. Her husband & kids are perfect & so is the supporting cast. I wouldn’t miss an episode

This is a horrible sh0w with an even worse cast! You’re keeping this train wreck ABC but you’re canceling THE KIDS ARE ALRIGHT! What could you possibly be thinking? Oh, wait, you’re not thinking…. at least not about what the viewer want. Now there is only one program we watch on your network… THE ROOKIE! Please reconsider… cancel this on & keep THE KIDS ARE ALRIGHT!

I really love the show