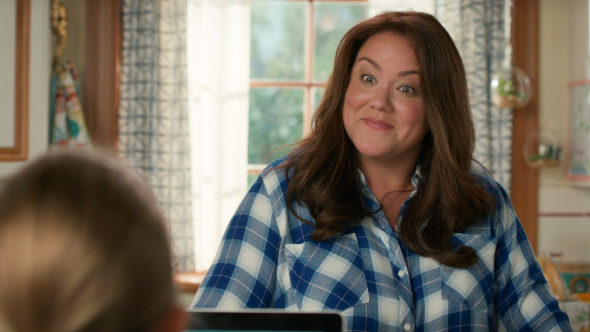 With her kids getting older and more independent, can Katie keep control of her household in the fifth season of the American Housewife TV show on ABC? As we all know, the Nielsen ratings typically play a big role in determining whether a TV show like American Housewife is cancelled or renewed for season six. Unfortunately, most of us do not live in Nielsen households. Because many viewers feel frustrated when their viewing habits and opinions aren’t considered, we invite you to rate all of the fifth season episodes of American Housewife here.  *Status Update Below.

An ABC family comedy series, American Housewife stars Katy Mixon, Diedrich Bader, Meg Donnelly, Daniel DiMaggio, Giselle Eisenberg, and Ali Wong. The sitcom centers on Katie Otto (Mixon), a confident and unconventional mother from the wealthy town of Westport, Connecticut. Katie wants to “keep it real” stand apart from her community’s “perfect” parents and their entitled children. Katie’s logic-driven husband, Greg (Bader), supports her efforts as best he can. Together, they try to make sure that their three kids — headstrong Taylor (Donnelly), snarky Oliver (DiMaggio), and obsessive-compulsive Anna-Kat (Eisenberg) — understand their family’s old-fashioned values, so they don’t end up carbon copies of their neighbors.

What do you think? Which season five episodes of the American Housewife TV series do you rate as wonderful, terrible, or somewhere between? Do you think that American Housewife should be cancelled or renewed for a sixth season on ABC? Don’t forget to vote, and share your thoughts, below.

I LOVE THIS SHOW! Please renew for season 6! I binge watched it again! I can’t believe you guys would even think about cancelling it.

I love this show! Funny, quirky and heart warming!

Love the show! Love the actors and the quirky characters the portray! It’s funny and full of family laughter. Please renew this show

Excellent Show! Great that Franklin, Cooper and Trip are on more regularly. The new AnnaKat is working out well!

Watch occasionally , but the show is pretty good.

I still hope that ABC will renew American Housewife for another season.

Show’s off to a fine start giving Logan Pepper status as a regular in the Otto Household. This has incredible possibilities. Also, Giselle Eisenberg was made for the role of Anna Kat.

I am upset that there is a NEW ANNA-KAT…..to me she was the highlight of the show…WHAT A TALENT…she was amazing….WHY DID SHE LEAVE….I READ NOTHING ABOUT THIS….HOLY COW…..I AM BUMMED OUT…..I MARVELED ABOUT HER ACTING…SHE WAS AMAZING… I AM NOT SURE I WILL WATCH ANYMORE.