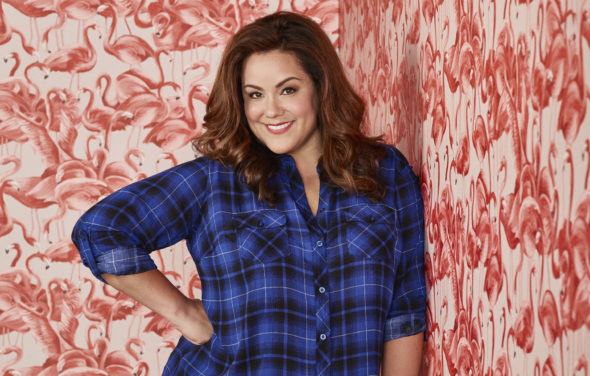 Katie won’t be keeping her family on their toes for a sixth season. ABC has cancelled the American Housewife TV show so it won’t be back for the 2021-22 television season.

A family comedy, American Housewife stars Katy Mixon, Diedrich Bader, Meg Donnelly, Daniel DiMaggio, Giselle Eisenberg, and Ali Wong. The sitcom centers on Katie Otto (Mixon), a confident and unconventional mother from the wealthy town of Westport, Connecticut. Katie wants to “keep it real” stand apart from her community’s “perfect” parents and their entitled children. Katie’s logic-driven husband, Greg (Bader), supports her efforts as best he can. Together, they try to make sure that their three kids — headstrong Taylor (Donnelly), snarky Oliver (DiMaggio), and obsessive-compulsive Anna-Kat (Eisenberg) — understand their family’s old-fashioned values, so they don’t end up carbon copies of their neighbors.

Airing on Wednesday nights, the fifth season of American Housewife averaged a 0.55 rating in the 18-49 demographic and 2.95 million viewers in the live+same day ratings. Compared to season four, that’s down by 7% in the demo and down by 9% in viewership.

The defacto series finale aired on March 31st. The comedy aired for 103 episodes.

What do you think? Do you like the American Housewife TV show? Are you disappointed that it’s been cancelled? Were you hoping that it would be renewed for a sixth season on ABC?

I knew it was a death knell when they got rid of Katie’s lunch friends and brought in a supposed best friend of hers ( who had never even been mentioned before). It was obvious that they were trying to gather viewers by having her played by a black actress. There should have been more actors of color in the first place. Too little too late. Just as bad an omen is bringing in a new baby or an adoption. Always an answer to a show losing it’s ratings. It’s a shame because I really liked the show. Never missed… Read more »

This was the best family show! My kids & I loved it!! Why would you cancel this hilarious family sitcom? ABC is always about the rating. So disgusted .

I’m so sad we won’t get another season of the Otto family. There were SO MANY story opportunities with a pregnant Katie.

So sad this isn’t coming back

Loved this show! so disappointed.

I’m not surprised the show got cancelled, but I had hoped it would get at least one final season to wrap everything up, especially given the finale cliffhanger. I will miss this show and this family!