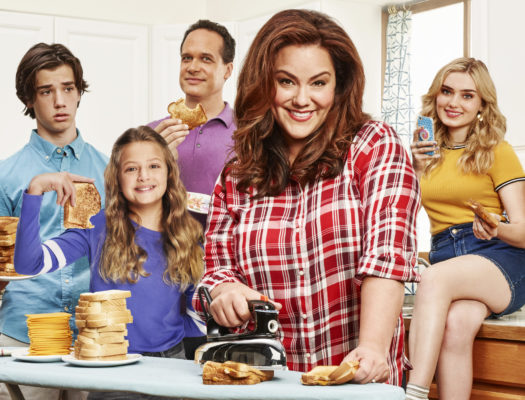 Can Katie continue to “keep it real” in this crazy world? Has the American Housewife TV show been cancelled or renewed for a sixth season on ABC? The television vulture is watching all the latest cancellation and renewal news, so this page is the place to track the status of American Housewife, season six. Bookmark it, or subscribe for the latest updates. Remember, the television vulture is watching your shows. Are you?

Airing on the ABC television network, American Housewife stars Katy Mixon, Diedrich Bader, Meg Donnelly, Daniel DiMaggio, Giselle Eisenberg, and Ali Wong. The sitcom centers on Katie Otto (Mixon), a confident and unconventional mother from the wealthy town of Westport, Connecticut. Katie wants to “keep it real” stand apart from her community’s “perfect” parents and their entitled children. Katie’s logic-driven husband, Greg (Bader), supports her efforts as best he can. Together, they try to make sure that their three kids — headstrong Taylor (Donnelly), snarky Oliver (DiMaggio), and obsessive-compulsive Anna-Kat (Eisenberg) — understand their family’s old-fashioned values, so they don’t end up carbon copies of their neighbors.

The fifth season of American Housewife averaged a 0.55 rating in the 18-49 demographic and 2.95 million viewers. Compared to season four, that’s down by 7% in the demo and down by 9% in viewership. Find out how American Housewife stacks up against other ABC TV shows.

Will ABC cancel or renew American Housewife for season six? For the 2019-20 season, this show was one of ABC’s lowest-rated comedies and it was renewed while higher-rated shows like Schooled, Bless This Mess, and Single Parents were all cancelled. It’s fully owned by ABC Studios so that’s a positive financially. I think American Housewife might be renewed for a final season but I wouldn’t be surprised if it was cancelled either.   I’ll update this page with breaking developments. Subscribe for free alerts on American Housewife cancellation or renewal news.

What do you think? Were you hoping that the American Housewife TV show would be renewed for a sixth season? Are you sorry that ABC cancelled this TV series, instead?

Please bring it back. Love this show

They can’t cancel it! There is too much happening in the end of season 5.
We want the wedding and we want to know what gender the baby is and what it’s name will be. Also i’m not the only one who’s waiting for oliver and cooper te get together! They have to make more of this great show!

American Housewife should not have been cancelled after multiple seasons of teasing the audience with a Cooper/Oliver storyline, as well as ending on that cliffhanger. Hopeful that another network will pick it up.

Please renew i absolutely love this show.please keep it going

Pls renew!!! I love this show! It would be a shame to loose another good comedy sitcom.

PLEASE RENEW American Housewife!!! One of my fav short shows on ABC. RENEW IT ABC!!!!

It deserves one more season to see what happens with cliff hangers of March 31st. Best episode this season.

Disappointed with all the character changes. Not enjoying much anymore.

I see an incredible spinoff possibility featuring the kids and their possible schemes. If you do this pls consider adding Tenzing Trainor as a regular. He is a hoot. Otherwise renew AH.