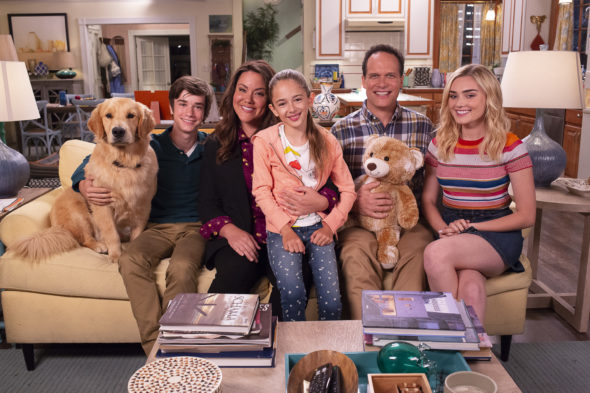 Is the Otto family still sticking out like a sore thumb in Westport, Connecticut? Has the American Housewife TV show been cancelled or renewed for a fourth season on ABC? The television vulture is watching for the latest cancellation and renewal news, so this page is the place to track the status of American Housewife, season four. Bookmark this page, or subscribe for the latest updates. Remember, the television vulture is watching your shows. Are you?

An ABC single-camera comedy, American Housewife stars Katy Mixon, Diedrich Bader, Meg Donnelly, Daniel DiMaggio, Julia Butters, Carly Hughes, and Ali Wong. The sitcom centers on Katie Otto (Mixon). As an average wife and mother, she prefers to stand apart from Westport CT’s “perfect” parents and their entitled children. Katie’s logic-driven husband, Greg (Bader), supports her efforts as best he can. Together, they try to make sure that their kids, Taylor (Donnelly), Oliver (DiMaggio), and Anna-Kat (Butters) internalize the family’s values, so they don’t end up carbon copies of their neighbors.

The third season of American Housewife averaged a 0.91 rating in the 18-49 demographic and 4.14 million viewers. Compared to season two, that’s down by 25% and 10% respectively. Check out how American Housewife stacks up against other ABC TV shows.

Will ABC cancel or renew American Housewife for season four? The ratings are pretty good, compared to the rest ABC’s slate. If renewed, the series will have enough episodes for syndication so I think it is safe. For now, I’ll keep an eye on the Nielsens and update this page from time to time. Subscribe for free updates on any American Housewife cancellation or renewal news.

*5/10/19 update: ABC has renewed American Housewife for a fourth season.

What do you think? Are you glad that the American Housewife TV series has been renewed for season four? How long do you expect this ABC sitcom to last?

Should have canceled this godawful garbage instead of The Kids Are Alright.

We LOVE this show!!! Watch it on our Hulu subscription. It is the best!

LOVE this show! & all of the cast! Look forward to watching it every week! So glad it’s being renewed
for Season 4! Thank You!

Please please please do not cancel this show. It’s the best sitcom on tv. This is the one show that my daughter and I can watch together, and we ALWAYS look forward to it. Please Keep It Coming!

Please dont cancel the show….I absolutely love this show….she is a real housewife/mom people can relate to.

I LOVE American Housewife! They give these “ratings” but no one has ever asked ME what shows I like. I think MOST of these comedies are awful, but I love this one.

I LOVE American Housewife! I never miss an episode. I schedule my errands around it So I can watch it live. Katie is a trip. Actually I love all the cast. They have grown to fit/accent each other. I like seeing Anna Cat growing up. I could go on & on. Her friends are a hoot. Greg is just so easy going-which is perfect for this family.
Bring them back for Season 4 + 5…6…7…8
We all Need to Laugh‼️

I could watch it forever! I accidentally binge watched season 1-3 in like a week hahahaha, craving more!! My heart dropped when I watched the last episode, we need more, more, MORE!!!!<3

It gets better the more I watch. Renew for a 4th season, and beyond.