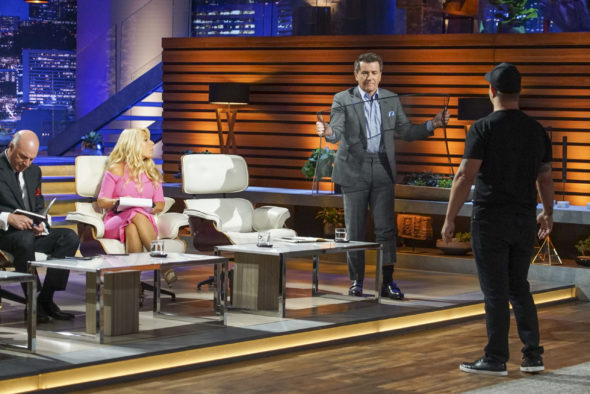 ABC revealed more about the moves in a press release. Check that out below.

Friday nights are about to see some shark-infested waters when Shark Tank, the critically acclaimed and multi-Emmy(R) Award-winning entrepreneurial-themed reality show currently in its 11th season, returns to its FRIDAY time slot on FEB. 28 (8:00-9:01 p.m. EST), while the hit comedy American Housewife moves to a new spot on the ABC comedy block beginning WEDNESDAY, APRIL 15 (9:00-9:30 p.m. EDT).

What do you think? Are you good with these night moves by ABC? Will you move with Shark Tank and American Housewife to keep watching?

I love both shows and will watch them in their new times.

Why move American Housewives to Wednesday? Wednesday is the night for Chicago shows!

This failed to mention that American Housewife is moving to Wednesday at 9:30 on March 18, then to 9 on April 15.

I think Sunday night is a better night for Shark Tank cuz on Fridays there’s too many other good programs that more people will watch rather than Shark Tank. Also Friday night people like to go out and party there for a lot of people won’t be home that night to watch Shark Tank.

YES,I will move to Wednesday’s for American Housewive LOVE the show!!

I don’t really watch Shark Tank, but do watch the combo of American Housewife and Fresh Off the Boat, it kind of makes me wonder why that show was not mentioned in the above story, since AH led off and FOtB followed it to finish off the hour of comedy.
Is this an indication on the fate of FOtB???

Fresh Off the Boat is canceled

I’m happy they are moving to Friday nights as I watch church on Sunday night and I miss it sometimes on Sunday!

American Housewife is getting stronger every year as the kids grow up and more kids are given key roles. Oliver is branching out into a key character and Anna-Kat is a hoot as she and Franklin relate together. Still, my favorite character is Cooper Bradford and would love to see more of Logan Pepper. Get him and Daniel DiMaggio scheming on some projects that cause all kinds of hijinks. Thank God the show has reduced Katie’s hate for the other housewives of their town. It was getting old. Love to see this more of a family show and less risqué.